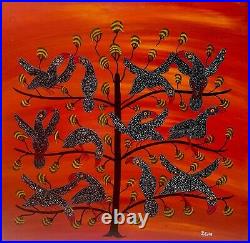 Painting has a brief but inspiring history. In 1961 Tanganyika became independent. In 1964 Tanganyika merged with the costal archipelago of Zanzibar to form The United Republic of Tanzania. At that time Edward-Saudi (ES) Tingatinga was working as a gardener in Dar es Salaam, Tanzania.

He began experimenting with painting using the materials he could obtain. Those were Masonite scraps and bicycle paints. By 1968 he had established a?

And a unique painting style that was attracting buyers and others. His subject matter came from whatever was around him -- people, animals, myths, landscape, sunset. Lacking any formal education Tingatinga did have some experience imitating Makonde and Makua wall paintings when he was a child. His TingaTinga style is probably the first uniquely Tanzanian art form. Edward-Saudi was a generous and exuberant, he willingly shared the knowledge of his skills with those close to him who wished to learn.

In 1972 after only 4 years as an artist he was shot to death. His work continued to develop and blossom through his students who created the subsequent TingaTinga art movement. ZENA's most famous theme for her painting is probably Coming to Roost.

Interesting effect on viewer of peaceful, calm energy. The Sil collection is special because at the time the commission was offered Tingatinga painters were no longer painting on Masonite board, the traditional backing, but painting on canvas. The commission was offered to Tingatinga painters who had been working since the 1980s and had learn to paint on Masonite boards rather than canvas.

This painting is from the collection made of that commission in 2006. The offer was for up to ten paintings in the traditional style using two foot squares of Masonite using enamel paints.

The selection of subject was at the discretion of the artist. Tingatinga painting on Masonite board with enamel may have been the first unique artist genre to emerge from the newly formed United Republic of Tanzania. Canvas TingaTinga paintings have the advantage of being easier to transport thus easier to sell than Masonite. Although in photographs the Masonite and canvas backed Tingatinga look nearly identical, Masonite allows greater depth of paint that creates a more vibrant appearance and adds gravity to the work. The photographs accurately show visual state of each painting.

Each painting is done on a 2 foot square of Masonite which is ¼ inch thick and rigid. The paint is applied heavily. It has a natural sheen that can be cleaned with a damp cloth and can tolerate all indoor conditions. The color will not readily fade in sunlight but the Masonite can be warped by intense heat. The painting can lean against any solid surface, be directly attached, suspended.

The painting can also be framed but neither matting nor glazing is necessary. This item is in the category "Art\Paintings".

The seller is "mak_250" and is located in this country: US. This item can be shipped to United States.