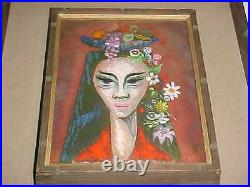 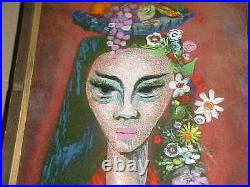 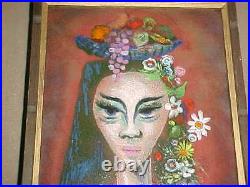 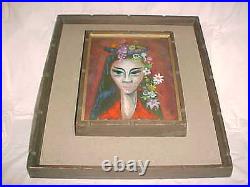 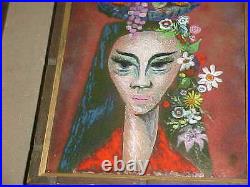 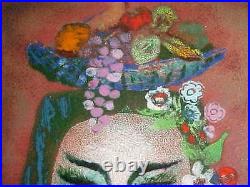 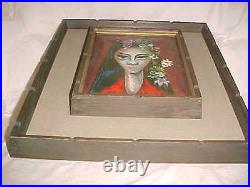 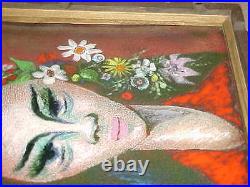 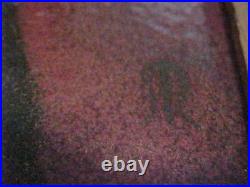 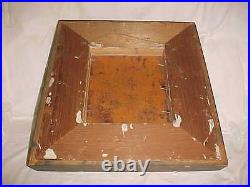 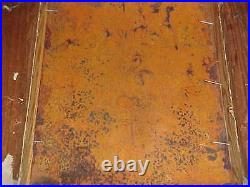 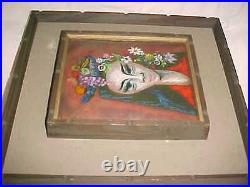 HERES AN OUTSTANDING SIGNED ORIGINAL VINTAGE MODERNIST ENAMEL-ON-COPPER PAINTING BY FLORIDA ARTIST SIDNEY ROSENBLOOM! This flawless enamel-on-copper painting, which measures approximately ten inches (10) in height by eight inches (8) in width, displays a stylized portrait of a woman from the neck upward with an emphasis on her redshirt, long black hair, dark-complected skin, large black eyelashes, flowers in her hair, and the bowl of fruit sitting on top of her head. And she has a rather serious look on her face. Rosenblooms color scheme is very complex, mostly involving darker tonalities, but with brighter highlights found in the flowers and fruit. The womans neck is rather long and somewhat tubular and she has an angular face. There is a hint of Carmen Miranda in the overall image but on a much more somber side. The enameling itself was executed Rosenbloom in free-hand drawing and painting directly onto the copper sheet. In addition, the enamel painting is mounted within a hand-made wood and linen frame which is actually a frame within a frame. In other words, the enamel-on-copper painting is mounted within a wooden frame that rises above a linen background and secondary wooden frame. The overall dimensions of wood frame are eighteen and one quarter inches (18 1/4) in height by sixteen and one quarter inches (16 1/4) in width. Condition: Again, the enamel painting itself is flawless -- absolutely beautiful! The original wood frame is in very good and clean condition with some small scuffs, a couple of accidental paint drips on the linen background, and some paint markings on the back side. Signed with the artists initials SR in the bottom right corner of the enamel painting. Please scroll down to read the artists biography about Sidney Rosenbloom.

Also, please contact me if you need additional information or photographs. SIDNEY ROSENBLOOM BIO (the following is a complete reprinting of an article titled Inview: Sidney Rosenbloom published in the October 1986 Glass On Metal magazine).

Sidney Rosenbloom was introduced to the art of enameling in 1955 by the ecclesiastical enameler Alexandra Korsakoff Galston (a nice of Rimsky-Korsakoff). While visiting at each others studios, they talked at great length about various media and techniques employed by contemporary artists. During one such visit, Sid commented on the depth of color and brilliance of one of Alexandras new small enamels.

Although Rosenbloom worked in painting, sculpture and terra cotta on a large scale, Alexandra persuaded him to do a painting using vitreous enamel as the medium. The first painting resulted in a work that made his oil paintings look weak and washed-out in comparison. This was the turning point in Rosenblooms career as an artist.

He used his ingenuity to research new potentials, and has creatively combined them with various old techniques which are unique to vitreous enamels. To achieve the depths of color requires the application and fusing of many layers of finely ground glass and mineral oxides to the copper base. High temperatures, ranging from 1500 to 1850 degrees Fahrenheit, must be used.

This presents results which, although predictable and controlled, are a challenge to the artist. Rosenbloom uses only the dusting method of applying the 80 mesh enamels which enables him to control extremely delicate nuances in tonal gradation of color and in the subtle hues which make a chiaroscuro of light and dark that models effectively the faces and figures of the humans animals which people his enamel paintings.

This same method is utilized for color variance in his landscapes and abstract paintings. Sgraffito is used for line accents when required. Rosenbloom feels that opaque and translucent enamels when dusted can be subtly and/or boldly applied, and when fired, result in a beautiful surface with tremendous visual impact such as no other media can produce, and need no further embellishment in line or modeling with under and/or overglaze painting.

Cloisonne, grisaille and other enameling techniques are beautiful in their own right. But for him in his direct approach to his paintings, dusting is the best method.

Rosenbloom possesses a rare affinity for his chosen medium, as reflected in the radiant brilliance and fluidity seen in the jewel-like surface of his paintings. His colors, soft and lyric or strong and vivid, have an intensity that is hard to describe.

By wedding these colors to contemporary subject matter and composition, he provides the viewer with an inspirational work of art. Before World War II, Rosenbloom participated in the Federal Arts Projects, sponsored by the Works Progress Administration.

This program included such artists as Jack Levine, John Sloan, Reginald Marsh and many other of the New York School who delighted in painting the basic essence of urban life. The strong, direct drawing and compositions of Titian and Rembrandt, Daumier and Degas, and in this century Levine and Marsh, are an influence in Rosenblooms approach to subject matter, drawing, composition, and depth of color. During and after the war, Rosenblooms career was primarily in the field of military intelligence.

For 16 years, his assignments kept him living and working in Europe, Japan, and the Pacific Islands, providing him with amply time to study various techniques in art, and to see first-hand major works by artists of all eras. He retired as a Major in the U. Air Force in 1963 after 21 years of service, and now resides and works in Fort Lauderdale, Florida.

Rosenblooms studio is completely equipped for the art of enameling, containing three furnaces: the old muffle type which had accompanied him all over the world since 1955, and a new rolling, non-muffle furnace developed by Jim Gregory of Cleveland. The latter enables Rosenbloom to fire panels between eighteen inches wide and any length required for large paintings and murals for public areas. At present, his 36 X 48 X 48 paintings are triptychs.

Rosenblooms award-winning enamel paintings are included in over 250 private and public, national and international art collections. He has received a special invitation to exhibit with the Artist Enameler Society in London. LASTLY, SHOULD THE WORD "EAMES" BE USED IN THE SEARCH TITLE, IT IS THERE FOR THE PURPOSE OF REFERENCING THE MID-CENTURY TIME PERIOD OF THE 1940S THROUGH THE 1970S. 14 THIS ITEM IS BEING OFFERED BY DESIGN REFERENCES -- ESTABLISHED BY A FORMER ART MUSEUM CURATOR TURNED BOOKSELLER SPECIALIZING in OUT-OF-PRINT and PERIOD MATERIALS on the PROGRESSIVE IDEAS of MODERNISM and POST-MODERNISM in DECORATIVE ARTS and ARCHITECTURE, INDUSTRIAL and STUDIO ARTS of the 19TH & 20TH CENTURIES.

15 PLEASE -- NO REQUESTS FOR PHOTOCOPIES OF THIS ITEM. I DO NOT MAKE PHOTOCOPIES UNDER ANY CIRCUMSTANCES. 16 AGAIN, COMMUNICATION IS KEY! 17 LASTLY -- WHEN OBSTACLES AND PROBLEMS LOOM LARGE AND YOU SEEM TO BE AT A STAND STILL, REMEMBER THAT EVEN A FALTERING STEP FORWARD IS BETTER THAN NO STEP AT ALL. The item "SIGNED SIDNEY ROSENBLOOM MODERN ENAMEL COPPER ART PLAQUE PAINTING MIDCENTURY 60S" is in sale since Wednesday, December 5, 2018. This item is in the category "Collectibles\Vintage, Retro, Mid-Century\1950s". The seller is "singeldad" and is located in Scottsdale, Arizona. This item can be shipped to United States.