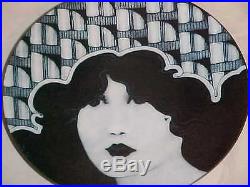 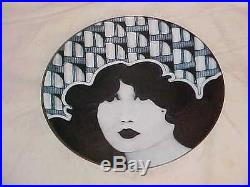 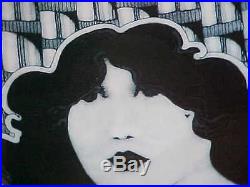 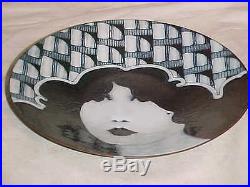 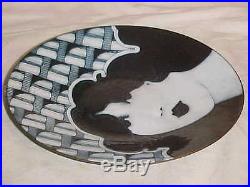 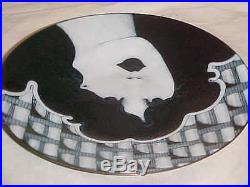 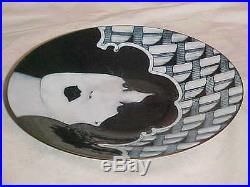 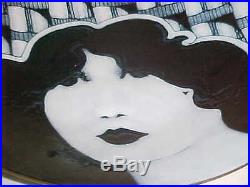 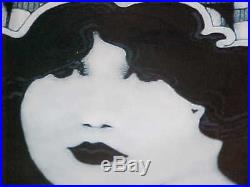 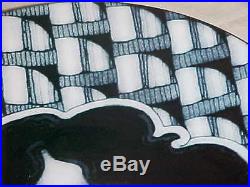 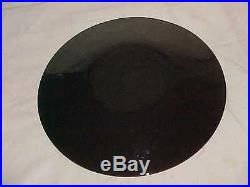 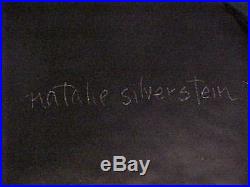 HERES AN AMAZING ORIGINAL VINTAGE 1970S OR 1980S MODERNIST ENAMEL-ON-COPPER PLATE COMPLETED IN THE GRISAILLE TECHNIQUE BY CANADIAN ARTIST NATALIE SILVERSTEIN b. 1949- THAT DISPLAYS A PRE-RAPHAELITE INSPIRED WOMAN WHO IS ELECTRIFIED BY LATE 20TH-CENTURY POP CULTURE! Measuring just under seven and one half inches (7 1/2) in diameter by one inch (1) in height, Natalie Silverstein created a very complex and visually stunning enamel painting predominantly showing the face and neck of a Pre-Raphaelite inspired woman. She has thick flowing black hair that acts as the bold background to her white enameled face and neck quite striking!

Above her is a visually powerful repeating pattern rendered in black and white, possibly curtains or a fabric design. Silverstein, who obviously was a master of the enamel arts, infused the entire image with a 1970s / 1980s Pop culture aesthetic countenance! Again, to create her enamel painting, Silverstein employed the Grisaille technique wherein a powdered white vitreous enamel is made into a paste by mixing it with water, turpentine, oil of lavender, or petroleum oil and applied to a dark enamel ground, usually colored black or blue. Lighter areas of the design are thickly painted, while the grey areas are obtained by painting with thinner coats to allow the dark background color to tone the white enamel pigment. This technique achieves a dramatic effect of light and shade and creates an effect of three-dimensional relief.

The final result is a monochrome color scheme with varying thicknesses of superimposed layers of white, thus creating half-tones on a dark, opaque or transparent background. Signed on the underside bottom Natalie Silverstein. There is one infinitesimal surface scratch on the front but this is only visible with a magnifying glass. Overall, this enamel-on-copper grisaille art plate is top-notch and an artistic knock-out! According to the book Biographical Index of Artists in Canada by Evelyn De Rostaing McMann (2003, University of Toronto Press), Natalie Silverstein was born in 1949 in Buffalo, New York, and her primary medium is listed as enamels.

Silverstein is listed again on the website for the Canadian Heritage Information Network as an artist living in Ontario, Canada as of 1975, and that her expanded artists biography is included in the 8-volume set titled A Dictionary of Canadian Artists compiled by Colin S. One other readily available piece of information about Silverstein is that four of her enamels are included in the permanent collection of the Springfield Museum of Art of Springfield, Ohio, a Smithsonian Institution affiliate. LASTLY, SHOULD THE WORD "EAMES" BE USED IN THE SEARCH TITLE, IT IS THERE FOR THE PURPOSE OF REFERENCING THE MID-CENTURY TIME PERIOD OF THE 1940S THROUGH THE 1970S. 14 THIS ITEM IS BEING OFFERED BY DESIGN REFERENCES -- ESTABLISHED BY A FORMER ART MUSEUM CURATOR TURNED BOOKSELLER SPECIALIZING in OUT-OF-PRINT and PERIOD MATERIALS on the PROGRESSIVE IDEAS of MODERNISM and POST-MODERNISM in DECORATIVE ARTS and ARCHITECTURE, INDUSTRIAL and STUDIO ARTS of the 19TH & 20TH CENTURIES.

15 PLEASE -- NO REQUESTS FOR PHOTOCOPIES OF THIS ITEM. I DO NOT MAKE PHOTOCOPIES UNDER ANY CIRCUMSTANCES. 16 AGAIN, COMMUNICATION IS KEY! 17 LASTLY -- WHEN OBSTACLES AND PROBLEMS LOOM LARGE AND YOU SEEM TO BE AT A STAND STILL, REMEMBER THAT EVEN A FALTERING STEP FORWARD IS BETTER THAN NO STEP AT ALL. The item "SIGNED NATALIE SILVERSTEIN MODERN GRISAILLE ENAMEL COPPER ART PAINTING PLATE WOW" is in sale since Thursday, December 6, 2018.