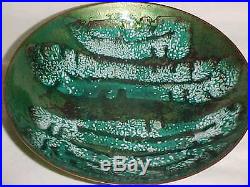 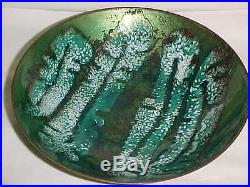 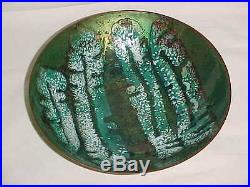 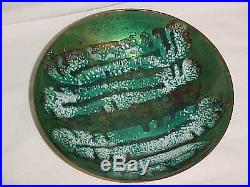 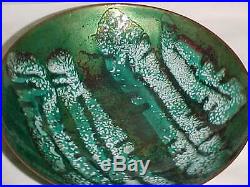 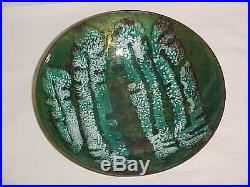 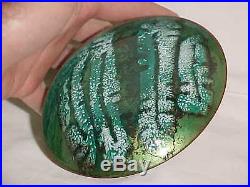 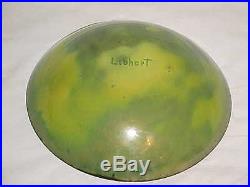 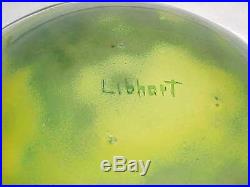 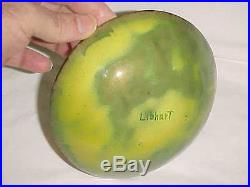 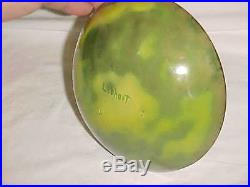 Measuring approximately five and three quarters inches (5 3/4) inches in diameter by one and one quarter inches (1 1/4) in height, Myles Libhart rendered the interior of this bowl with four large thickly applied abstracted shapes filled with variegated light blue and white enameling set against a variegated green to brown enameled background! The abstracted shapes have a feathery appearance. The bowls underside is counter enameled with a creamy yellowish-green-brown enameling. Signed on the underside bottom within the enameling itself Libhart. Condition: Generally excellent and clean condition but there are several craze lines on the interior outer rim area.

Overall, this is still a very nice example of Myles Libharts midcentury enamel art! Please scroll down to read the artists biography about Myles Libhart. Myles Libhart is one of the American enamel artists practicing during the 1950s who was fortunate to have his work selected for inclusion in the groundbreaking 1959 exhibition Enamels held at the Museum of Contemporary Crafts in New York City (please refer to the published catalog). Libharts enamel art, which included three vases and a wall panel, was shown alongside works by Arthur and Jean Ames, Karl Drerup, Doris Hall, the Woolleys, and all the other top-level artists from the United States. In addition, one of Libharts vases included in that exhibition was photographed in color and shown on page 27 of the magazine Craft Horizons from November December 1959 Vol.

From 1960 to 1963, Libhart was Supervisor of Exhibitions and Publications at the Brooklyn Museum, where he also taught enamel painting. His enamel art was regularly exhibited at the Museum of Contemporary Crafts and the Newark Museum. Beginning in 1963, Libhart began a new trajectory in his life and one that moved him away from the enamel arts. He became Director of Museums, Exhibitions and Publications for the Indian Arts and Crafts Board of the U.

In this position, Libhart oversaw programs aimed at fostering and promoting Native American arts. These included three government-administered museums of Indian art and history in Oklahoma, South Dakota and Montana, for which he organized or initiated numerous exhibitions (among them a series of solo shows featuring contemporary Indian artists and craftsmen) and authored a variety of catalogs and brochures. In 1974 he produced a widely distributed film, Native American Arts. Myles Libharts obituary can be found in the December 1989/January 1990 issue of American Craft magazine p.

66, which includes the artists photograph. LASTLY, SHOULD THE WORD "EAMES" BE USED IN THE SEARCH TITLE, IT IS THERE FOR THE PURPOSE OF REFERENCING THE MID-CENTURY TIME PERIOD OF THE 1940S THROUGH THE 1970S. 14 THIS ITEM IS BEING OFFERED BY DESIGN REFERENCES -- ESTABLISHED BY A FORMER ART MUSEUM CURATOR TURNED BOOKSELLER SPECIALIZING in OUT-OF-PRINT and PERIOD MATERIALS on the PROGRESSIVE IDEAS of MODERNISM and POST-MODERNISM in DECORATIVE ARTS and ARCHITECTURE, INDUSTRIAL and STUDIO ARTS of the 19TH & 20TH CENTURIES. 15 PLEASE -- NO REQUESTS FOR PHOTOCOPIES OF THIS ITEM. I DO NOT MAKE PHOTOCOPIES UNDER ANY CIRCUMSTANCES. 16 AGAIN, COMMUNICATION IS KEY!

17 LASTLY -- WHEN OBSTACLES AND PROBLEMS LOOM LARGE AND YOU SEEM TO BE AT A STAND STILL, REMEMBER THAT EVEN A FALTERING STEP FORWARD IS BETTER THAN NO STEP AT ALL. The item "SIGNED MYLES LIBHART ENAMEL COPPER ART BOWL MODERN MIDCENTURY ABSTRACT PAINTING" is in sale since Wednesday, November 28, 2018. This item is in the category "Collectibles\Vintage, Retro, Mid-Century\1950s".