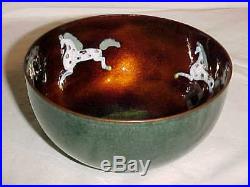 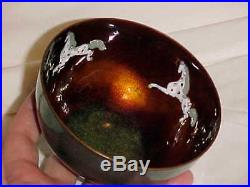 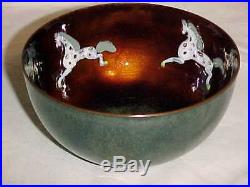 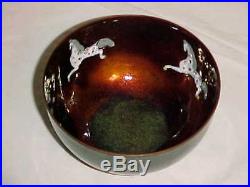 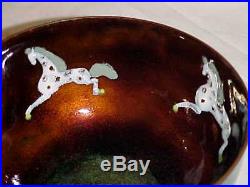 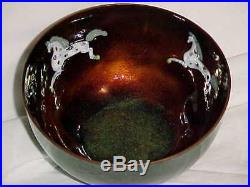 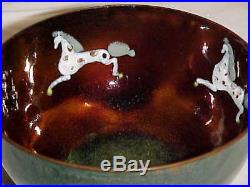 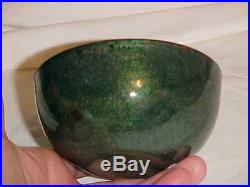 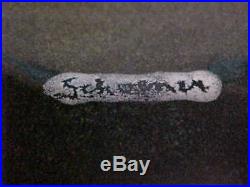 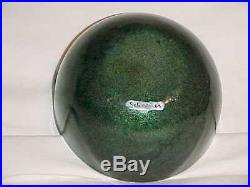 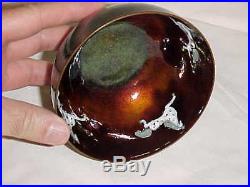 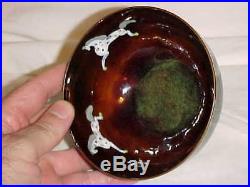 Please Note: Jason Schoener is a 20th-century American artist primarily known for his abstract landscape paintings and drawings, as well as being an art instructor first at the Munson-Williams-Proctor Arts Institute during the late 1940s and then from 1953 onward at California College of Arts & Crafts. But there is also another side to Schoeners artwork that included the art of enameling, which he was clearly practicing right after WWII while living in Utica and teaching crafts at the M-W-P-A-I. To this end, there is currently a set of enamel-on-copper jewelry for sale on-line titled Jason Schoener Modernist Enamel Rooster Pin & Earrings that still retains the artists original paper label with his address in Utica. This verifies Schoeners commitment to the enamel arts during this early time period (and which he most likely continued after his move to California). And as you can see from the photographs shown above, Schoener employed translucent chocolate brown enamel for the bowls interior and painted four galloping horses rendered in white enamel with brown spots. The bowls exterior and underside bottom display a beautiful variegated dark green enameling with a hares-fur like appearance.

This same enamel is on the inside bottom as well. Signed on the underside bottom with the artists last name Schoener and completed within a narrow strip of white enamel -- which was the standard way he signed his enamels. Please see the other enamel bowl by Jason Schoener in my listing #152813840876 for comparison purposes. Condition: This enamel-on-copper bowl is in excellent and clean condition essentially flawless!

This bowl is a top-notch example of Jason Schoeners enamel art! Please scroll down to read the artists biography about Jason Schoener. Born in Cleveland, Ohio in 1919, Schoener came from a family of distinguished American artists. He was the nephew of sculptor/painter William Zorach and his wife, painter Marguerite Zorach.

Beginning in 1939, Schoener spent his summers at the Zorach family farm in Georgetown, Maine, where he helped with chores and studied art with his Uncle William. Jasons cousin, artist Dahlov Ipcar (the Zorachs daughter), was also part of those summer art sessions. In 1941 Schoener graduated from the Cleveland Institute School of Art and spent a year at the School of Architecture at Western Reserve University. He enrolled in the U. Naval Reserve at Northwestern University and was commissioned as an ensign in 1944, serving at the Eniwetok Atoll in the Pacific. After the war, Schoener began his teaching career at Munson-Williams-Proctor Institute School of Arts in Utica, NY while also earning a masters degree from Columbia. In 1951 he married Virginia Worley, and they moved to California, where Schoener served as an instructor, department chairman, and dean at California College of Arts and Crafts.

Meanwhile, Schoener continued to use his Georgetown home as a summer studio, while also finding time to travel to Europe and Latin America. Scenes he observed in Scotland, Greece and Latin America, in particular, found their way into many of his oil paintings. Other favorite subject matter included floral still life, naval operations scenes and, of course, land and seascapes from around Georgetown. Throughout his career, he worked in both oils and watercolor. Schoeners other teaching assignments included Mills College, and the Athens Technological Institute in Greece.

Over the span of almost two decades, Schoener had several solo exhibitions at the Midtown Gallery on East 57th Street in New York. In September of 1993, Schoener exhibited at the Boyden Gallery at St. In 1994, Schoener donated 21 of his paintings done during the war to the U. Schoener and his wife were in California at the time of his death in 1997. LASTLY, SHOULD THE WORD "EAMES" BE USED IN THE SEARCH TITLE, IT IS THERE FOR THE PURPOSE OF REFERENCING THE MID-CENTURY TIME PERIOD OF THE 1940S THROUGH THE 1970S.

The item "SIGNED JASON SCHOENER MODERN ENAMEL COPPER ART BOWL MIDCENTURY PAINTING HORSES" is in sale since Monday, August 12, 2019. This item is in the category "Collectibles\Vintage, Retro, Mid-Century\1950s". The seller is "singeldad" and is located in Scottsdale, Arizona.