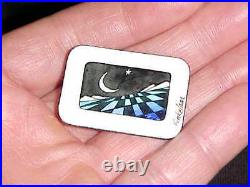 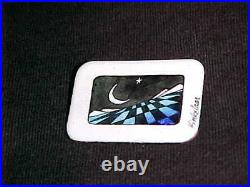 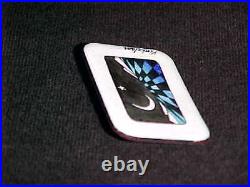 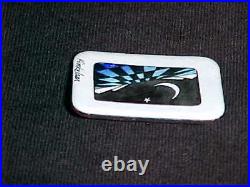 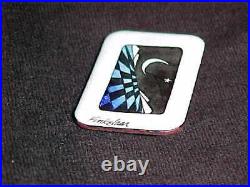 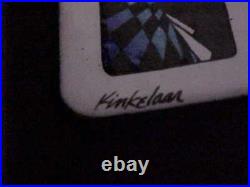 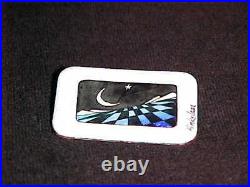 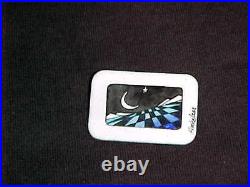 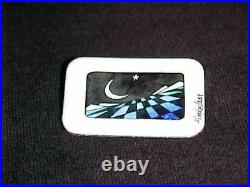 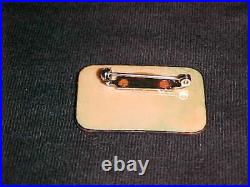 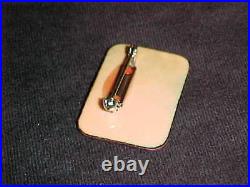 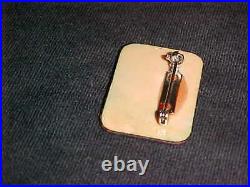 HERES A SIGNED ORIGINAL VINTAGE 1980S OR 1990S ENAMEL-ON-COPPER ART BROOCH BY HAWAIIN ARTIST JACK KINKELAAR THAT DISPLAYS ONE OF HIS FANTASY LANDSCAPES COMPRISED OF A BLUE AND BLACK CHECKERBOARD GROUND, BLACK NIGHTTIME SKY, LARGE WHITE CRESCENT MOON AND DISTANT STAR, AND HORIZON LINE OF WHITE SNOW-CAPPED MOUNTAINS! Measuring approximately one and one half inches (1 1/2) in width by one inch (1) in height, Jack Kinkelaar essentially created a miniature painting on this enamel-on-copper brooch that follows one of his long-standing and continuing artistic themes of fantasy landscapes incorporating outer-space elements with earth-bound elements. The blue and black enameled checkerboard ground appears like a landing site for an extraterrestrial spaceship, somewhat reminiscent of the checkered light display scene found in the 1977 movie Close Encounters of the Third Kind. In addition, Kinkelaar tilted the blue and black enameled checkerboard ground as a way to accentuate the other-worldliness of the scene. The broochs backside is counter enameled in flesh-toned enamel.

Signed on the front Kinkelaar in black enameling along the right-side edge. Condition: Excellent and clean condition essentially flawless! Please scroll down to read the artists biography about Jack Kinkelaar! JACK KINKELAAR BIO (the following is a complete reprinting of an article written by Suzanne Tswei for the August 12, 2001 issue of the Honolulu Star Bulletin newspaper courtesy the website for the Archives of the Honolulu Star Bulletin). Local Color -- Sunday, August 12, 2001 -- By Suzanne Tswei.

Queens Nurses Surprised to Find an Artist in Their Midst. THE SECRET will be out for good today: Jack Kinkelaar has been leading a double life -- one as an artist who makes exquisite cloisonné jewelry, and one as a nurse in the respiratory unit at Queen's Medical Center. An exhibit of his work opens today at the hospital's small gallery. It is his first show on Oahu, though he has been a well-established artist in juried crafts exhibitions on the Mainland.

When I sent out the postcard announcing this show, it kind of caused a ruckus on the hospital floor. Kinkelaar has been quiet about his art career. He has been a nurse at the hospital for two years, but for more than 12 years, he has been a successful artist with a faithful clientele. Kinkelaar isn't shy about being an artist, but he isn't about to toot his own horn, either.

Gallery director Masa Taira had to remind him to say that he was one of only three American artists invited to Russia for an enameling symposium in the late 1990s. Taira had no idea Kinkelaar was an accomplished artist when the two met by chance at the gallery's bulletin board. Kinkelaar was reading a jewelry workshop announcement, and the two struck up a conversation.

He offered to help me with the gallery, and he did what he said he was going to do. Then one day he brought in some of his pieces, and I said,'Oh, you have to have a show,' Taira said. The brilliant colors, fine workmanship and imaginative designs bowled Taira over. Anybody can learn the technique, Kinkelaar said in his understated fashion. It just takes time, the commitment to spend the time to do it well.

" Cloisonné is of French origin, meaning "little fences. The craft involves drawing with a paper-thin silver wire and coloring with powdered glass.

Kinkelaar begins with his design in pencil and copies it with the wire onto a silver plate. Then he paints on the colors with a brush the size of a pin. The colors are applied layer upon layer to build intensity, and each layer requires a firing in a small kiln. The process is detailed and time-consuming, but Kinkelaar calls the results wonderfully expressive.

It is an art suited to his abilities because he likes to draw. I find that the good cloisonné artists are the ones who can draw. It all boils down to the design.

Like I said, the technique is easy. Kinkelaar also employs a similar enamel technique, Limoges, for his work. He does his own metal smithing, creating the silver or gold pieces for the enameling. Lotus blossoms and a cute green alien have been among his favored images. Often he incorporates semiprecious stones and bought metal pieces.

He grew up in Cleveland, but his jewelry-making career began after he moved to the Big Island in 1973. Kinkelaar was making a decent living at his art until he was rejected from two lucrative exhibits in 1991. While he was reaccepted the following year, the rejection spurred him to seek a second career in nursing. The two lives are very different. Nursing can be very stressful, but I can go home to my art. His new career as a nurse has given him an elevated status among his artist friends.

When medical emergencies occur during a fair, he's looked upon as the lifesaver. He's waiting to see if his nursing friends will see him in a new light after the art exhibit. In addition, please visit the artists own website to read his artists profile and to view more of his work.

LASTLY, SHOULD THE WORD "EAMES" BE USED IN THE SEARCH TITLE, IT IS THERE FOR THE PURPOSE OF REFERENCING THE MID-CENTURY TIME PERIOD OF THE 1940S THROUGH THE 1970S. 14 THIS ITEM IS BEING OFFERED BY DESIGN REFERENCES -- ESTABLISHED BY A FORMER ART MUSEUM CURATOR TURNED BOOKSELLER SPECIALIZING in OUT-OF-PRINT and PERIOD MATERIALS on the PROGRESSIVE IDEAS of MODERNISM and POST-MODERNISM in DECORATIVE ARTS and ARCHITECTURE, INDUSTRIAL and STUDIO ARTS of the 19TH & 20TH CENTURIES. 15 PLEASE -- NO REQUESTS FOR PHOTOCOPIES OF THIS ITEM. I DO NOT MAKE PHOTOCOPIES UNDER ANY CIRCUMSTANCES. 16 AGAIN, COMMUNICATION IS KEY! 17 LASTLY -- WHEN OBSTACLES AND PROBLEMS LOOM LARGE AND YOU SEEM TO BE AT A STAND STILL, REMEMBER THAT EVEN A FALTERING STEP FORWARD IS BETTER THAN NO STEP AT ALL. The item "SIGNED JACK KINKELAAR MODERN ENAMEL COPPER ART BROOCH JEWELRY FANTASY PAINTING" is in sale since Tuesday, November 27, 2018. This item is in the category "Collectibles\Vintage, Retro, Mid-Century\1950s". The seller is "singeldad" and is located in Scottsdale, Arizona. This item can be shipped to United States.