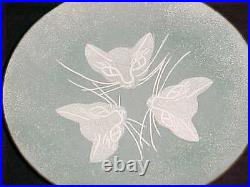 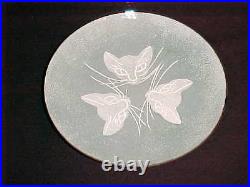 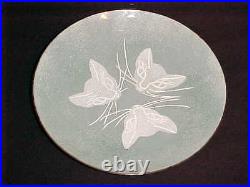 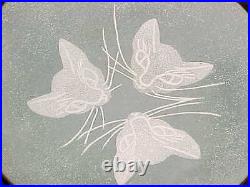 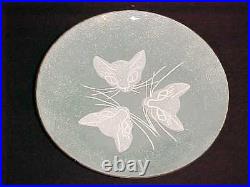 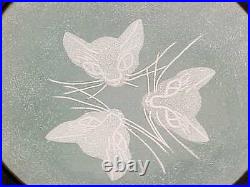 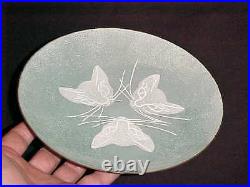 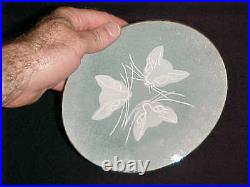 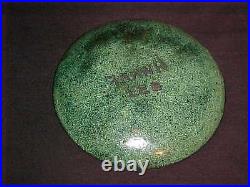 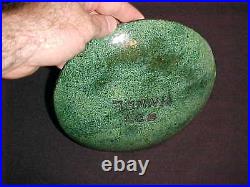 HERES AN OUTSTANDING SIGNED ORIGINAL VINTAGE 1940S -1960S ENAMEL-ON-COPPER PLATE BY PROVINCETOWN, MASSACHUSETTS / NEW YORK ARTIST FRANK LEE! Please Note: Frank Lee was without a doubt one of the more important and accomplished American enamel artists from the mid twentieth century based on the body of work he created. And yet, Lee has not been given any recognition whatsoever in recently published historical surveys about this artistic medium. Granted, there are many enamel artists who deserve to be included within the canon of American enamel art history but Lee in particular needs his due diligence. It is time to at least place him on the map. Lee initially hand-hammered the copper form of the plate and then created a Surrealistic grey-and-white design of floating cat heads with long overlapping whiskers. The plates underside is counter enameled in black-speckled dark greenish-cream enamel. Signed Frank Lee on the underside bottom within the enamel itself, with the letter F in his first name turned in reverse. It is very unusual to find an example of Lees enamel art signed in this way.

Generally, the artist simply signed his pieces with only his last name. He must have been feeling squirrely that day. Condition: Generally excellent and clean condition with one infinitesimal flea bite on the rim (barely visible) and a few infinitesimal scratches on the interior (which require a magnifying glass to be seen). Overall, this an incredible example of Frank Lees enamel art! Please scroll down to read the first-ever attempt (albeit meager) to provide an artists bio about Frank Lee.

The 1948 issue (#7) of Everyday Art Quarterly magazine published by the Walker Art Center of Minneapolis was almost entirely devoted to an exhibition titled Modern Jewelry Under Fifty Dollars. In this issue Frank Lee is listed as an artist from New York and his entry into the exhibition was a set of enamel-on-copper jewelry. Although there is no doubt Lee became involved with the enamel arts much earlier than 1948, this is the earliest reference that could be found which definitively verifies him as an artist working with this medium.

In addition, the birth date of 1908 given to Frank Lee on the askArt website is also questionable. Unfortunately, there just isnt much information available about Lee at the time of this writing. But suffice it to say, Lees enamel art does, in fact, speak for itself. LASTLY, SHOULD THE WORD "EAMES" BE USED IN THE SEARCH TITLE, IT IS THERE FOR THE PURPOSE OF REFERENCING THE MID-CENTURY TIME PERIOD OF THE 1940S THROUGH THE 1970S.

14 THIS ITEM IS BEING OFFERED BY DESIGN REFERENCES -- ESTABLISHED BY A FORMER ART MUSEUM CURATOR TURNED BOOKSELLER SPECIALIZING in OUT-OF-PRINT and PERIOD MATERIALS on the PROGRESSIVE IDEAS of MODERNISM and POST-MODERNISM in DECORATIVE ARTS and ARCHITECTURE, INDUSTRIAL and STUDIO ARTS of the 19TH & 20TH CENTURIES. 15 PLEASE -- NO REQUESTS FOR PHOTOCOPIES OF THIS ITEM.

I DO NOT MAKE PHOTOCOPIES UNDER ANY CIRCUMSTANCES. 16 AGAIN, COMMUNICATION IS KEY! 17 LASTLY -- WHEN OBSTACLES AND PROBLEMS LOOM LARGE AND YOU SEEM TO BE AT A STAND STILL, REMEMBER THAT EVEN A FALTERING STEP FORWARD IS BETTER THAN NO STEP AT ALL.

The item "SIGNED FRANK LEE MODERN ENAMEL COPPER ART PLATE MIDCENTURY PROVINCETOWN PAINTING" is in sale since Monday, August 12, 2019. This item is in the category "Collectibles\Vintage, Retro, Mid-Century\1950s". The seller is "singeldad" and is located in Scottsdale, Arizona. This item can be shipped to United States.