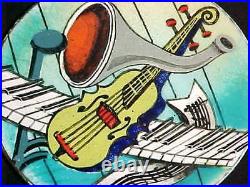 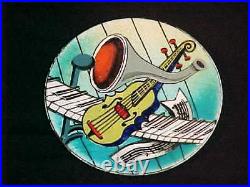 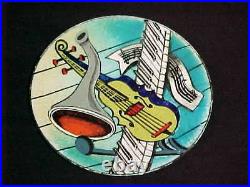 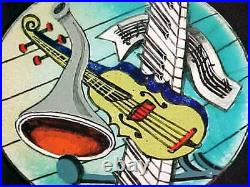 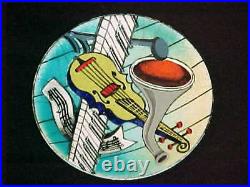 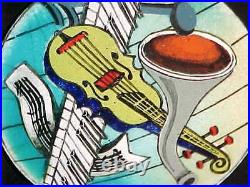 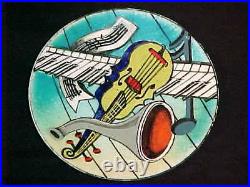 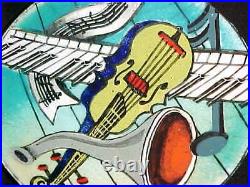 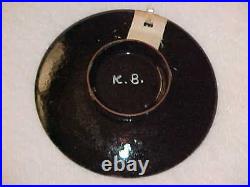 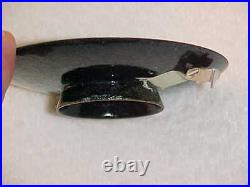 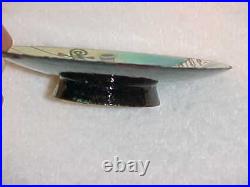 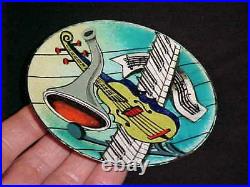 Please Note: I have several works by Kathe Berl currently listed that represent her early interest in musical instruments as an artistic device. To this end, please compare these examples to a nearly identical footed bowl in the collection of The Enamel Arts Foundation of Los Angeles, which can be viewed on their website. Measuring approximately four inches (4") in diameter across the top, three quarters of an inch (3/4") in height, by one and three quarters inches (1 3/4) in diameter across the base, Kathe Berl created a stylized composition of musical instruments including a piano keyboard, violin, Victrola gramophone horn, sheet music, a large musical note, and musical scale bars running across the background. Berl rendered the musical instruments and other artistic devices in red, lime-green, cobalt-blue, grey, white, and black enameling, and then set them against a lighter blue to yellow enameled background. The plates underside is counter enameled in black enameling.

Signed with the artists initials K. On the underside bottom in white enameling. Kathe Berl typically signed her work with only her initials. Condition: Generally very good and clean condition but with several craze lines located in the blue to yellow enameled background.

Also, Please Note: There is an old cloth hanging device attached to the backside of the plate so that the plate can be hung on the wall. While this cloth hanging device is quite old, it is not known whether or not the artist Kathe Berl attached it to the place or if it was attached somewhat later. Overall, this is still a rare and beautiful example of Berls enamel art!

Kathe Berl was born in Vienna in 1908. At a young age she started drawing on all over the walls and floors of her nursery. With the encouragement of her mother, she began art classes in 1917, at the age of nine, with Professor Franz Cizek, who had a school for talented children. There she was exposed to various aspects of arts and crafts: painting, carving, embroidery, and metalwork. In 1922 she published a childrens book, Ein frohes Jahr, which she wrote and illustrated.

She attended the Kunstgewerbeschule in Vienna. First exposed to enameling after graduating from art school, she felt an immediate passion for the medium, which never wavered. Working in her mothers kitchen, she began making enameled jewelry for sale.

She also exhibited in the Decorative Arts and Ceramics Exhibition in Wichita in 1952. She started out using the more traditional Limoges technique, then moved on to other traditional techniques such as grisaille and plique-à-jour.

She kept experimenting with the medium, taking it to new and unusual levels. By the early 1960s Berl pioneered the use of enameling in three-dimensional forms.

At first, the enamels were embedded into her sculptural forms, which were lit from behind or from within, producing an effect reminiscent of stained-glass windows. Her new work gained prominence and was featured in an exhibition presented by the Artist-Craftsmen of New York at the National Design Center in 1965. Her desire to make transparent enamel sculptures, plique-à-jour enamels on a monumental scale, pushed her research and experimentation in the 1970s.

One of her largest creations in this technique, City at Night, was four feet high. Katherine Wood described Berl in the June 1995 issue of Glass on Metal: She was a risk taker, always finding ways to be innovative, unconcerned whether it was commercial enough. Her imagination was without limits and she was unafraid to try the impossible. Berl also loved to teach and became a prominent educator in the field.

In 1950 she and Mizi Otten cowrote and self-published a manual on enameling technique entitled The Art of Enameling; or, Enameling Can Be Fun, which was one of the earliest how-to books on the subject to appear in this country. She started to write technical articles for Ceramic Monthly in 1958 and also contributed to the book Crafts for the Aging, published by the American Craftsmens Council in 1962.

She became a contributing writer to Glass on Metal in June 1988. In that issue, she wrote: The art of enameling is ancient yet eternally new. So versatile and open to development. Each piece I do is a stepping stone to the next and fulfillment will never come. Whether tongue-in-cheek or in a serious vein.

To play it like an instrument. LASTLY, SHOULD THE WORD "EAMES" BE USED IN THE SEARCH TITLE, IT IS THERE FOR THE PURPOSE OF REFERENCING THE MID-CENTURY TIME PERIOD OF THE 1940S THROUGH THE 1970S. 14 THIS ITEM IS BEING OFFERED BY DESIGN REFERENCES -- ESTABLISHED BY A FORMER ART MUSEUM CURATOR TURNED BOOKSELLER SPECIALIZING in OUT-OF-PRINT and PERIOD MATERIALS on the PROGRESSIVE IDEAS of MODERNISM and POST-MODERNISM in DECORATIVE ARTS and ARCHITECTURE, INDUSTRIAL and STUDIO ARTS of the 19TH & 20TH CENTURIES.

15 PLEASE -- NO REQUESTS FOR PHOTOCOPIES OF THIS ITEM. I DO NOT MAKE PHOTOCOPIES UNDER ANY CIRCUMSTANCES. 16 AGAIN, COMMUNICATION IS KEY! 17 LASTLY -- WHEN OBSTACLES AND PROBLEMS LOOM LARGE AND YOU SEEM TO BE AT A STAND STILL, REMEMBER THAT EVEN A FALTERING STEP FORWARD IS BETTER THAN NO STEP AT ALL. The item "SIGNED 1940S KATHE BERL MODERN ENAMEL COPPER ART PLATE MIDCENTURY JAZZ PAINTING" is in sale since Sunday, January 13, 2019.

This item is in the category "Collectibles\Vintage, Retro, Mid-Century\1950s". The seller is "singeldad" and is located in Scottsdale, Arizona. This item can be shipped to United States.