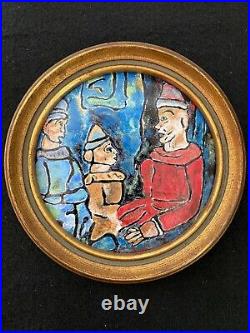 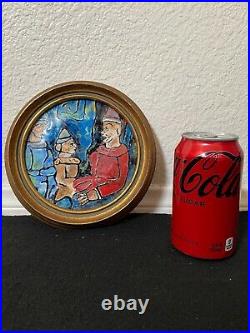 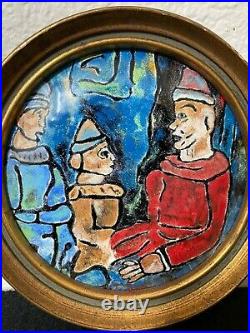 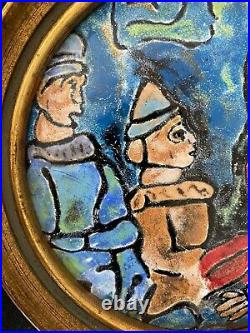 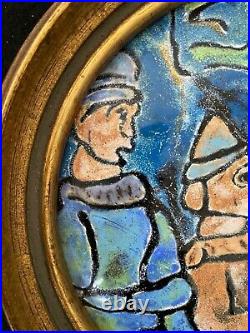 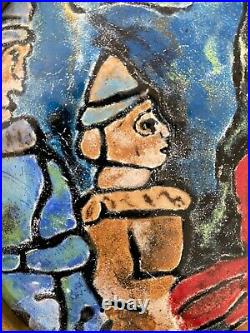 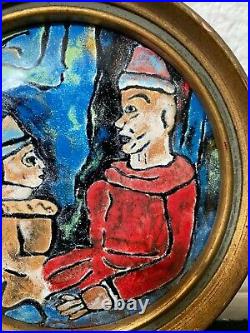 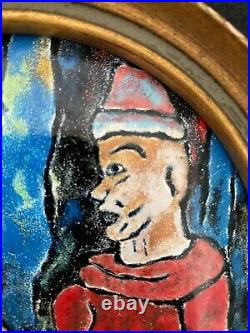 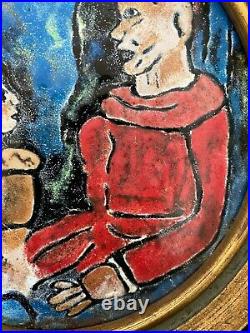 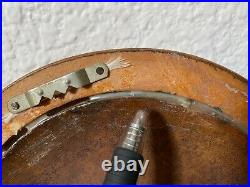 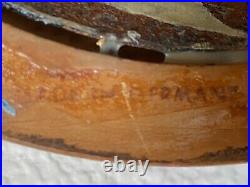 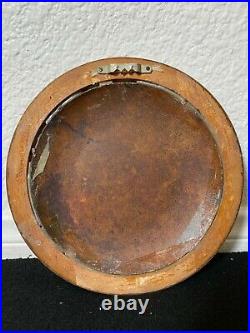 This is an vey RARE Antique Mid Century Modern Impressionist Enamel Painting on copper, after famed French modernist painter Georges Rouault. This work is from a very limited series of enamel paintings produced after the artist, with examples painted on both copper and steel.

Rouault also experimented with enamel painting, and it was a medium he was fond of. This work depicts three of Rouault's characteristic clowns in the midst of conversation. The colors of this work are vibrant and rich, and this is clearly a masterfully created piece. This work is unsigned, but the backing paper is missing, which may have had more information on this piece. A stamp on the frame reads: Made in Germany.

Approximately 7 3/8 inches tall x 7 3/8 inches wide including frame. Acquired from an affluent estate in Pasadena, California. Figure, genre and still life painting. Georges Henri Rouault (27 May 1871 - 13 February 1958) was a French Fauvist and Expressionist painter, and printmaker in lithography and etching.

Rouault was born in Paris into a poor family. His mother encouraged his love for the arts, and in 1885 the fourteen-year-old Rouault embarked on an apprenticeship as a glass painter and restorer, which lasted until 1890. This early experience as a glass painter has been suggested as a likely source of the heavy black contouring and glowing colors, likened to leaded glass, which characterize Rouault's mature painting style. During his apprenticeship, he also attended evening classes at the School of Fine Arts, and in 1891, he entered the École des Beaux-Arts, the official art school of France. There he studied under Gustave Moreau and became his favorite student. Rouault's earliest works show a symbolism in the use of colour that probably reflects Moreau's influence, and when Moreau died in 1898, Rouault was nominated as the curator of the Moreau Museum in Paris. Georges Rouault also met Henri Matisse, Albert Marquet, Henri Manguin, and Charles Camoin. These friendships brought him to the movement of Fauvism, the leader of which was considered to be Matisse. From 1895 on, he took part in major public exhibitions, notably the Salon d'Automne (which he helped to found), where paintings with religious subjects, landscapes and still lifes were shown. In 1905 he exhibited his paintings at the Salon d'Automne with the other Fauvists. While Matisse represented the reflective and rationalized aspects in the group, Rouault embodied a more spontaneous and instinctive style. His use of stark contrasts and emotionality is credited to the influence of Vincent van Gogh. His characterizations of overemphasized grotesque personalities inspired the expressionist painters.

In 1907, Rouault commenced a series of paintings dedicated to courts, clowns and prostitutes. These paintings are interpreted as moral and social criticism. He became attracted to Spiritualism and the dramatic existentialism of the philosopher Jacques Maritain, who remained a close friend for the rest of his life.

After that, he dedicated himself to religious subjects. Human nature was always the focus of his interest. Rouault said: A tree against the sky possesses the same interest, the same character, the same expression as the figure of a human. At the end of his life he burned 300 of his pictures (estimated to be worth today about more than half a billion francs).

His reason for doing this was not profound, as he simply felt he would not live to finish them. [1] Rouault died in Paris in 1958. This item is in the category "Art\Paintings". The seller is "willsusa_utzeqm" and is located in this country: US.

This item can be shipped to United States, Canada.