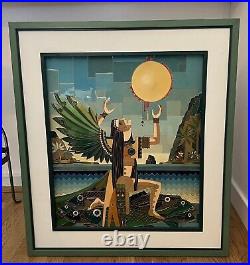 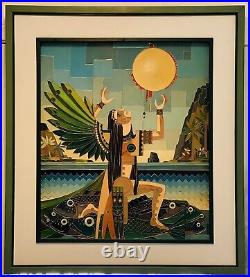 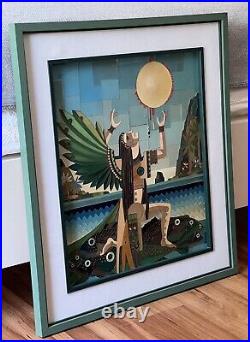 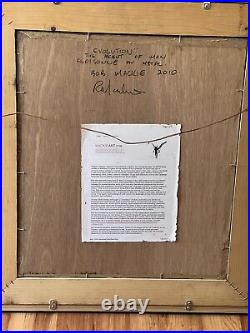 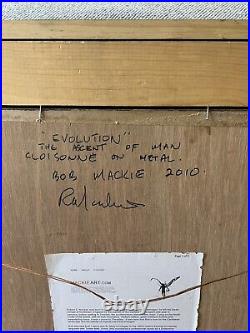 Title: "Evolution" the Ascent of Man. Condition: Very Good / Excellent. Another great intricate conversation piece by the talented multi media artist Robert (Bob) E. So much going on in this piece that permeates positivity and hope. Cloisonné is an ancient method for decorating metal, used for making jewelry and adorning weapons and vessels with geometric or schematic designs.

This adaption of the ancient process by artist Bob Mackie involves creating complex images by forming compartments (cloisons in French) on a metal background using silver or gold colored wires. These wire dividers remain visible in the finished piece, separating the different compartments that are then filled with brilliantly colored liquid enamel. The result is colorful, intricate one-of-a-kind works of art. Mackie, was born in Sunderland, England.

As a young teenager, he left the bleak climate of Northeast, England for the warmth of the Caribbean. He spent one year in Jamaica, before settling in Trinidad, the southernmost island in the chain. Living on the North Coast of the island, with its lush mountains, verdant valleys, green bamboo forests and meandering rivers, it was a move to Paradise. It was here that Bob's love for the Caribbean landscape and his palette of tropical hues first emerged.

Bob attended both Fatima and St. Mary's Colleges in the 1950's before training as a textile engraver with Textile Mills, Arima. Bob maintained a professional career as a production manager for several decades, working for local and international companies but his most memorable work experience involved a sojourn as a manager of SIMLA, a scientist research station, in the remote Arima valley.

Since SIMLA was affiliated with the Bronx Zoo, New York, Bob encountered many naturalists and scientists working in Trinidad and had the opportunity to accompany them on expeditions deep into Trinidad's rainforests, swamps and caves. Once again, his knowledge of, and love for, the landscape and the flora and fauna of the island, was cultivated.

Art-wise, Bob is totally self taught, a "chameleon" of styles and techniques that he has developed and mastered over years of experimentation. He has produced works in metal sculpture, watercolor, acrylic and oil painting, paper collage and cold enameling (cloisonné). His natural artistic talent was inherited from his father, a man he never knew. Bob's father, Robert H. Mackie, died as a volunteer in the Spanish Civil War, just months before the birth of his son.

He has held annual one-man shows in Trinidad for the past 40 years and has also exhibited in numerous group shows in the Caribbean, California and London. Bob's artwork continues to be in demand in Trinidad, where it adorns the walls of private residences and established businesses.

He is a regular exhibitor at Horizon's Art Gallery in Port of Spain, Trinidad. Bob presently resides in Redondo Beach, California. He designs for the Tile Guild Inc. In Los Angeles, specializing in Renaissance tiles, as well as one-of-a-kind murals and back splashes for homes in the exclusive communities of Malibu and Beverly Hills. His work has appeared in Architectural Digest and other national publications.

This item is in the category "Art\Paintings". The seller is "art_plug" and is located in this country: US.