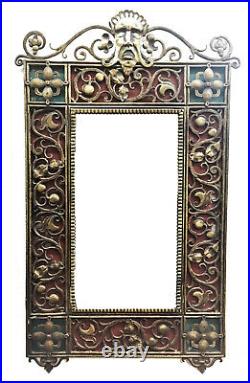 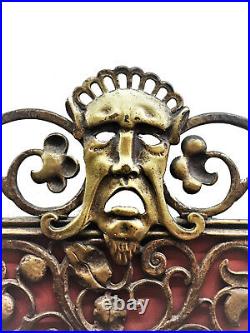 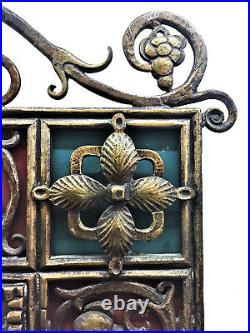 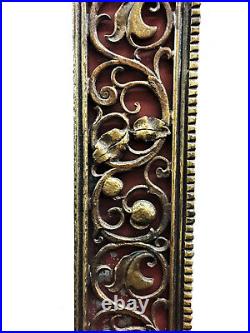 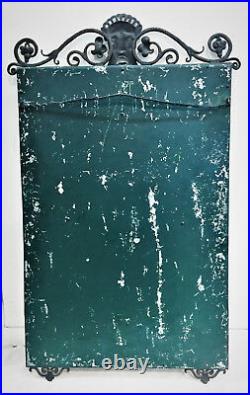 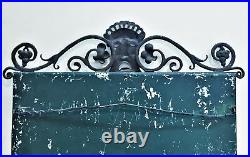 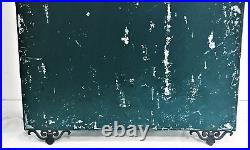 German-born artisan, who was one of the most technically skilled and commercially successful figures in the field of decorative metalwork during the first half of the 20. His design and production ranged from small and domestic to grand-scale architectural. His style was as diverse as his use of metals and included Arts & Crafts, Gothic, Renaissance, Spanish Baroque, Tudor Revival, and, on occasion, modern Art Deco. Thematically he was particularly fond of the zodiac, of lush scrolling grapevines, classical masks, mythological symbols and elements of the Italianate and Germanic grotesque. Oscar Bach's work can be found in the permanent collections of The Metropolitan Museum of Art, The Minneapolis Museum of Art, The Wolfsonian, and Reynolda House. As a young man, he studied painting at the Royal Academy in Berlin and underwent a 4-year apprenticeship in metallic arts. Following this formal education, Bach became the artistic director of metallic arts firm in Hamburg, where he made an ornate jewel encrusted Bible cover for the study of Pope Leo XIII - an early article of his craft which remains in the Vatican permanent collection.

Two years later, Bach won several important commissions to design metalwork for civic buildings, including the new city hall in Berlin. Between 1904 and 1911, Bach worked as a successful metalsmith in Germany, keeping a studio in Venice and traveling extensively throughout Europe, the Middle East and North Africa, where he became keenly aware of various decorative styles, history, materials, and techniques. In 1911, Bach won the Grand Prix at the World's Exposition in Turin, Italy for a bed he designed for Kaiser Wilhelm II. 1911 was also the year when he moved to the United States to join his brother Max, and establish a business in New York City. Soon after his arrival, Oscar Bach and his brother opened a metal design studio together - first in Greenwich Village, under the name of BACH BROTHERS; but soon moved to 257 West 17.

Street and became Oscar B. He worked often with architect Harrie T. Lindeberg and designed exterior and interior fittings for many of Lindebergh's clients. In April of 1923, the Bach brothers moved to a new studio at 511 West 42. Street upon an acrimonious split with their business partner, Bertram Segar.

Segar would continue to run a successful custom metalwork studio throughout the 1920s despite Oscar Bach's continued denouncing of Segar's poor ethics and poor taste. Despite such difficulties, Oscar Bach's Manhattan-based business continued to flourish throughout the mid-1920s and 1930s. Commercially, Bach's production pieces ranged from the modest, such as a small lead ashtray - to the pricey, such as a highly- ornamental bronze chandeliers. Almost every conceivable form was available - smoking stands, library lamps, footed bowls, card trays, planters, torchéres, andirons, slab tables, mirrors, sconces, picture frames, humidors, chairs, bookends, children's flatware, porringers - all fabricated in bronze or iron, steel or aluminum, silver or copper or, occasionally, lead; and featuring polychrome enamels, delicate chemical and cold patina work, custom Steuben glass components, and fanciful cast ornamental detail. Bach routinely submitted his diverse objects to the Metropolitan Museum of Art's Exhibition of Industrial Art and would capitalize on the show's prestige by posting advertisements with photos of his exhibits. He networked well and made important social and business connections with bankers, museum directors, hotel magnates, and architectural firms. In 1926, he won the prestigious Medal of Honor from the Architectural League of New York for a set of bronze doors to their club room.

Bach was a perceptive self-marketer, who advertised consistently in a variety of magazines - some associated with fine art and décor, such as International Studio; and others, more associated with the leisure class lifestyle, such as Theatre and Country Life. Wherever his commission work took him, Bach would seek to secure a local venue, usually a high-end department store, to sell his designs.

Altman to Joseph Horne in Pittsburgh and Forster-Smith in Toledo. Once in Europe, one could visit Bach's studio in Piazza Oberdan, Florence, Italy. But New York City was Bach's headquarters and it is here that one could find artist's main show room and many of his most ambitious architectural commissions, including New York's Riverside Church, Temple Emanu-el, the Masonic Level Club, the Earl Carroll Theatre, the Daily News Building, the Chrysler Building, Rockefeller Center, the Woolworth Building, the Airlines Building, and the Williamsburg Savings Bank in Brooklyn. Perhaps his crowning glory is the large inlaid stainless steel mural he fabricated and installed in the lobby of the Empire State Building in 1931. Elsewhere Bach won high-status commissions from the Procurement Division of the Treasury Department, Washington D.

Yale University, The Toledo Museum of Art, Christ Church at Cranbrook, and the Circle Tower in Indianapolis. At the same time, many of Bach's most impressive creations were not accessible to the public. These were the custom metalwork commissions he executed for the homes of some of America's wealthiest aristocrats, including Eugene duPont, Jr.

S Delaware mansion Owl's Nest; W. Scripps' Michigan estate, Moulton Manor; Lloyd Frank's lavish Fir Acres in Portland (now Lewis & Clark College); and the ornate Villa Philbrook for Waite Phillips of Tulsa. By the late 1930s, Bach's showroom and sales office had relocated to the prestigious British Empire Building at 620 Fifth Avenue and was operating under the name Bach Products. His studio, which employed numerous European trained artisans, was located at 288 East 18th Street in Patterson, NJ. Throughout his career Bach filed for a total of 66 patents with the U.

Patent Office and in 1941 Bach patented the "Bachite" system of construction to render steel corrosion and abrasion proof. The year of 1941 marks the end of his work in the field of decorative arts and the beginning of his career as a metallist for some of America's top industrial firms. From 1941 until his death in 1957, Bach worked as a top consultant for Remington-Rand, Manning, Bowman, Edward Budd, Oneida, Baldwin Locomotive, American Radiator Company, and the Tappan Stove Company. Upon his death, Oscar Bach and his wife Pauline were living at 962 Fifth Avenue with a lovely view of Central Park and the surrounding city of New York that had been his home for over four decades. According to his obituary in the New York Times, in the months leading up to his death, Bach's largest free-standing sculpture, "The Spirit of Democracy, " a 17 foot allegorical figure, was nearing completion and scheduled to be placed at Rockefeller Center's La Maison Française terrace.

Though Bach finished this massive tribute work, "The Spirit of Democracy" was never installed. During Bach's lifetime, the artist was celebrated by renowned art critic and author, Matlack Price, in a publication called Design & Craftsmanship in Metals: The Creative Art of Oscar Bach. Interviews with Bach were featured in numerous magazine articles and trade publications. Oscar Bach died in 1957, at the age of 72.

Please observe photos carefully, as they are a significant part of the description. Any potential defect shown in the photos, but not mentioned in the description will be considered as described. We guarantee the authenticity of all items to be as represented. Ashville Fine Arts Gallery specializes in a variety of fine art, antiques, jewelry, collectibles and rare finds.

If you have not seen something that interests you or that you collect, please visit often and check our ever expanding inventory. We make a best effort to provide a fair and descriptive condition report. Please examine the photos attentively, as they are an integral part of item descriptions. Domestic & International Customers are Welcome! All items are carefully packed and insured.

The item "Oscar Bach, Arts & Crafts Gilt Bronze & Enamel-Painted Metal Wall Mirror, 1900s" is in sale since Thursday, May 6, 2021. This item is in the category "Antiques\Furniture\Mirrors". The seller is "ashvillegallery" and is located in New York, New York. This item can be shipped worldwide.