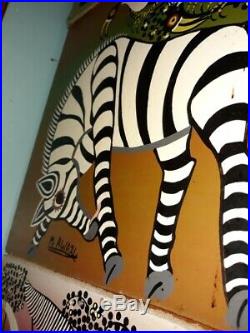 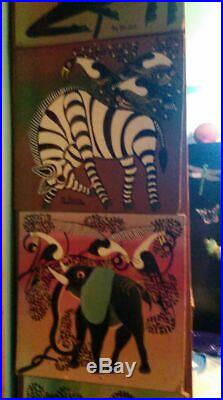 This is an original TingaTinga which was bought in Dar es Salaam, Tanzania in 1971. This style of painting was started in 1968 by a man called Edward Saidi Tingatinga. The owner lived in Tanzania from 1971 to 1972 and bought these paintings directly from Mr. Four were signed by artists and three were not.

One of the four paintings was signed by Hashim Mruta who was a former policeman, before joining Tingatinga in the early 70s. In an effort to document who painted which painting, the corporative had numbers printed on the artwork. These numbers were assigned during the early 70s. Although artist Mruta's art work does not have a number on it, it is signed.

All of the paintings used Masonite and bicycle paint. Painting of Colorful Zebra Modern Art No Frame. Black and White Zebra, With colorful Peacock and Black and White bird Signed by the artist. Original one of a kind.

The item "Original Tingtinga from Tanzania, Africa" is in sale since Tuesday, June 18, 2019. This item is in the category "Art\Paintings".

The seller is "518518" and is located in Henderson, North Carolina. This item can be shipped to United States.