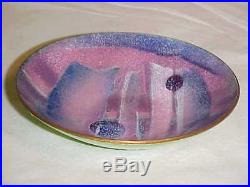 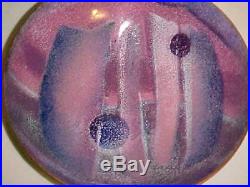 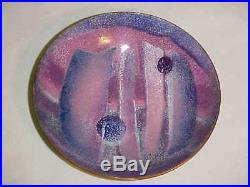 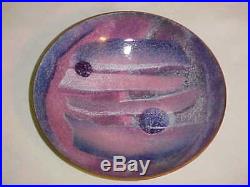 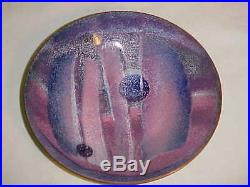 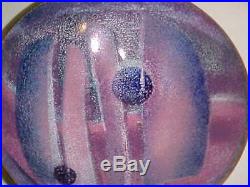 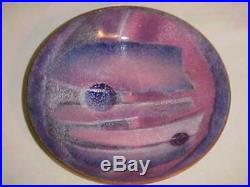 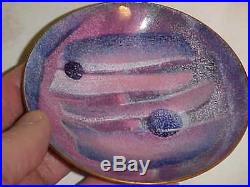 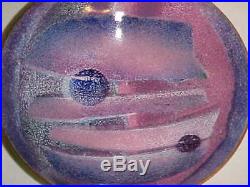 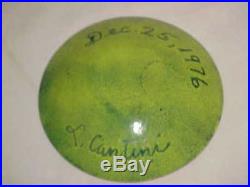 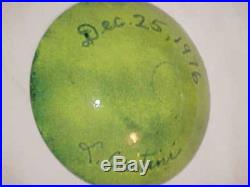 Lucille Cantini, who received her Bachelor of Fine Arts from Carnegie Technical Institute (mid 1940s) and her training as an enamelist from her husband Virgil Cantini, created a very bold modernist abstraction that appears to be a futuristic cityscape based on color and shape. The enameling, which appears to have been rendered by Cantini through the use of free-hand painterly techniques, is mesmerizingly beautiful. The color scheme is sumptuous and intense, and it includes various shades of dark purple to pinkish-purple with white highlights.

The bowls underside is counter enameled with what is truly an iconic Cantini yellow enamel variegated with black highlights. In addition, the weight of the copper bowl form is substantial, especially for its size of four inches (4) in diameter by three quarters an inch (3/4) in height. The bowl is signed L.

Cantini as a script signature within the enamel itself on the underside outer rim area (see photos above) and dated December 25, 1976. Lucille created this bowl on Christmas! Condition: Excellent and clean condition absolutely beautiful! Overall, this is an outstanding example of Lucille Kleber Cantinis modern enamel art! Lucille Kleber was born in 1921 and grew up in Allegheny, Pennsylvania.

She attended the Carnegie Technical Institute (now Carnegie Mellon University) and received her Bachelor of Fine Arts. It was while a student at Carnegie Tech during the early 1940s that she met fellow-art-student Virgil Cantini. They fell in love and married in 1946. Even while raising two young daughters during the early 1950s, the artistic atmosphere of their home never allowed Lucille to stay idle with her own art. By 1954 she was creating enamel jewelry to supplement the family income and by the late 1950s Lucille had expanded her enamel art production to include bowls, boxes, and plaques, among other forms, which she created throughout her lifetime.

A newspaper article titled Lucille Cantini Stars in Art Exhibition by Ralph Brem that was originally published May 9, 1964, in The Pittsburgh Press will now be reprinted in its entirety. Lucille Cantinis lucky star is probably made of copper with enamel overlays. At least her 12 ideas of the symbols of the zodiac are and they are the stars of her new one-woman show at the Upstairs Gallery at the Arts & Crafts Cente at Shadyside. They are not the whole show, but the panels especially Capricorn, Scorpio, and Aries are show stealers.

They have colors galore, because as Lucille puts it: I like bright colors; life is dull enough. She has such things as the fireworks display called Rocket Flowers and Red Leaves, in which gullies where she left off enamel have fired the metals skin into the texture of old chewing gum and the three dimension Campus Girls. Heat is the big thing in her work the kiln goes at 1500 degrees and can play tricks with colors and metals. She learned the techniques from her husband, Sculptor Virgil Cantini and has been using them for about 10 years, first in the making of jewelry, then on to bigger things.

She has some bowls of various sizes in the show and only one hunk of jewelry which is a surprise since this is what she has become known for in recent years. Her show runs through May 24. LASTLY, SHOULD THE WORD "EAMES" BE USED IN THE SEARCH TITLE, IT IS THERE FOR THE PURPOSE OF REFERENCING THE MID-CENTURY TIME PERIOD OF THE 1940S THROUGH THE 1970S.

16 AGAIN, COMMUNICATION IS KEY! 17 LASTLY -- WHEN OBSTACLES AND PROBLEMS LOOM LARGE AND YOU SEEM TO BE AT A STAND STILL, REMEMBER THAT EVEN A FALTERING STEP FORWARD IS BETTER THAN NO STEP AT ALL. The item "LUCILLE CANTINI MODERN ENAMEL COPPER ART BOWL MIDCENTURY ABSTRACT PAINTING NICE" is in sale since Wednesday, November 14, 2018. This item is in the category "Collectibles\Vintage, Retro, Mid-Century\1950s".