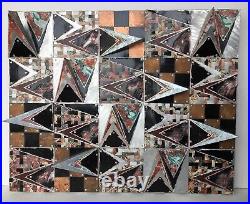 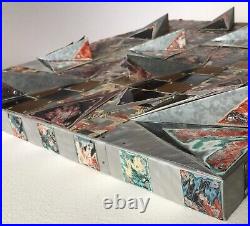 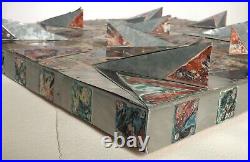 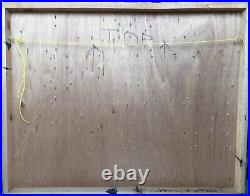 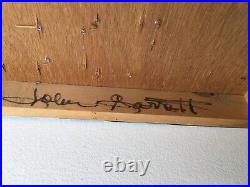 24 x 30 x 4 inches. Oil enamel paint on aluminum, galvanized steel, copper clad circuit board, riveted to board. John Garrett was raised in southern New Mexico by parents who were both educators.

They instilled in him an appreciation for the handmade with their collections of Native American arts and crafts. He moved to Claremont, California, to attend college at Claremont Men's College now Claremont McKenna College.

Following his desire to make things by hand, he enrolled in a weaving class taught by Marion Stewart at Scripps College in 1970. His intrigue with the tools, systems and materials involved in weaving and other textile constructions led him to take other courses with Neda Al-Hilali a year later, also at Scripps. He did graduate work at the University of California, Los Angeles, where he studied with Bernard Kester and Vasa.

Garrett has exhibited throughout the United States for over thirty years in hundreds of exhibitions, as well as in Europe, Africa and Asia. Garrett has worked simultaneously with two and three-dimensional formats to create his textile forms with a variety of materials. Visually unpredictable, his work may be woven, wrapped, plaited, riveted, painted, rusted, twined, nailed, stitched or tied. With an expansive repertoire of materials, each work of art is a meticulously crafted, while achieving a energetic complexity; he moves gracefully from constructing wall pieces to baskets, breathing new life into discarded objects. Currently a full time studio artist, he teaches workshops on creativity and experimental basketry at schools nationwide. He was awarded a National Endowment for the Arts fellowships in 1983 and 1995 as well as elected a Fellow of the American Craft Council in 2010. This item is in the category "Art\Paintings". The seller is "hottiehumper" and is located in this country: US. This item can be shipped to United States.