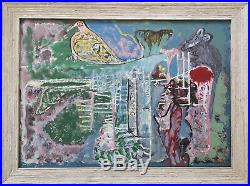 The Intuitive painter Leonard Daley was born in St. He started painting some time in the 1960's but no works have been preserved from before 1979, when he first came to the attention of the local artistic community.

Partly abstract, partly surreal, partly realist (in its depiction of birds, snakes or plants), it is always deeply spiritual. Daley's paintings offer a rich stew of allusions to the power of natural forces, humankind's relationship to the animal world, primeval spirits and the irrepressible fecundity of the earth. Perhaps in a way closely similar to that of Everald Brown's visionary work, Daley's semi-abstract images tap into and evoke a sense of Jamaica's collective cultural consciousness, its collective memory or sense of its history. Leonard Daleys mural like outpourings have all the power of Dubuffets Art Brut, or the Surrealist imagery of Andre Masson, yet with none of the self-conscious denial employed by these modern artists. In 1987 when Daleys work was included in the. Exhibition, David Boxer could still write with honesty that Leonard Daley had no concept of his work as being art, in the sense of a commodity. He painted on fragments of used tarpaulin and plywood, often utilizing both sides of these surfaces and had no desire to title his work. Today, a realism tinged with sadness is sensed in the fact that Daley now conforms to more formal methods of presentation, using more durable and readily exhibited materials, suggesting that even with the sensitive protection of the National Gallery of Jamaica, this intuitive is far more aware than he used to be. Nevertheless, his imagery is still visually powerful. To view Daley's work is to enter a claustrophobic hysterical world of spirits, specters, and bad-minded people.

One of Daleys devices is to slice the head in profile thus revealing the inner workings of the mind and the many thoughts, good and evil, that take place there. Often the results are terrifying, since Daleys assessment of the world is a very judgmental one. For him the process of depiction is purgative, and the imagery he displays, is often violent, bloody and cruel. Yet, the hellish nature of his painting is not indicative of the artists personality, rather, Daleys work operates within a type of evangelical ethic, closely aligned to the Pentecostal churches so prevalent in Jamaica. These churches preach a gospel that acts as a kind of bridge between African spiritual beliefs and Christian orthodoxy that suggest redemption through images that are at once sacrificial and violent.

The blood of the lamb that washes whiter than snow, though gruesome, represents purity and salvation, in much the same way, Daleys works exorcise demons in order to cleanse and liberate the mind. All my work, its just automatically. [sic] I close my eyes and I pray a lot. Sometimes tears fall downsometimes I sit down and look at the plain wall, and I cant penetrate it. I dont eat much food.

Yet, like the surrealist Joan Miros work of the 1920s, Daleys work is more hallucinatory than visionary, a self-inflicted libation that produces horrific imagery of nightmarish quality. In this world there is little light, a muddy and bloody palette pervades, while animals and men mutate into monsters that haunt every available space. Although we know this is a mental rather than a physical space, its latent pantheism suggests a fascinating interpretation of the world not altogether incredible. Certainly, the introduction of Daleys work within mainstream Jamaican art circles was greeted with an immediate comprehension, since it seemed to join forces with the tormented configurations of new imagists such as Milton George and Omari Ra.

Yet, Daleys unique vision is his own protection from being subsumed by any artistic movement. The unique nature of his visions are such that they suggest biblical and psychological rather than historical interpretations and it is perhaps these considerations that will ensure that he continues to paint from intuition rather than intellect. Essay extracted and edited from the. We want you to come back! You have 14 days within which to return your item. The item "Jamaican Intuitive Art Painting by Leonard Daley Outsider Artist (1930-2006)" is in sale since Monday, January 28, 2019. This item is in the category "Art\Mixed Media Art & Collage Art".