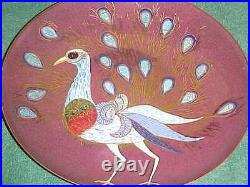 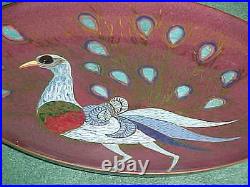 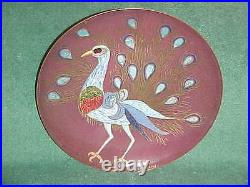 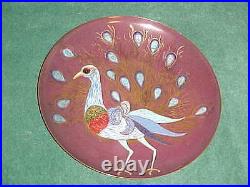 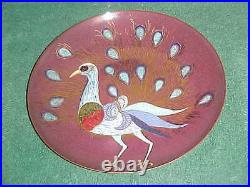 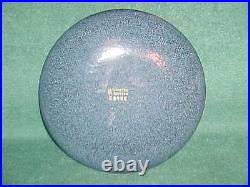 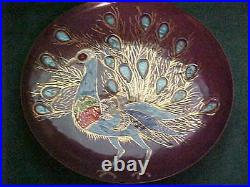 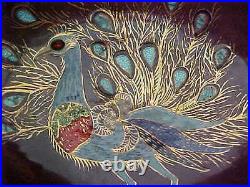 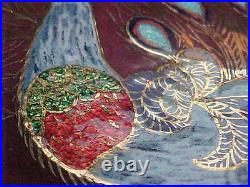 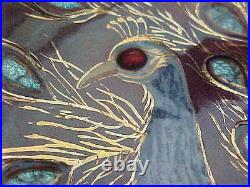 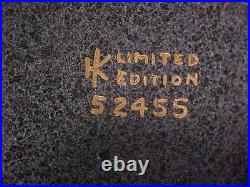 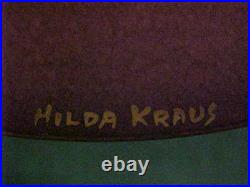 HERES A RARE ORIGINAL VINTAGE 1960S OR 1970S MIDCENTURY MODERN HANDMADE ENAMEL-ON-COPPER PLATE CREATED BY CONNECTICUT ARTIST HILDA KRAUS! Please Note: The photographs shown above include several that were taken with a flash and several without flash in order to gain a better understanding of this enamel plate's details. Measuring nine inches (9) in diameter and three quarters of an inch (3/4) in height, Hilda Kraus created a magnificent midcentury modern peacock in full plume with an enamel color scheme hinting on the psychedelic era.

To this end, Kraus used a purplish-plum-mauve enamel for the plates interior background which she then used as a canvas to paint a strutting male peacock with erect plumage, all of which is rendered in several shades of blue along with green and red foils for the chest, a yellow beak, and extensive gold overlay throughout! In addition, Kraus used a series of inlaid blue foils outlined by dark blue enamel for the peacocks feathers. The backside of the tray is counter enameled with a speckled black-and-bluish-white enamel.

Signed Hilda Kraus in gold along the bottom edge of plates front and on the backside the plate is signed with Kraus joined initials HK along with Limited Edition 52455. This exceptional example of Hilda Kraus modernist enamel art is in excellent and clean condition! The only condition is that the blue foil areas in the peacocks feathers have small craze lines. Otherwise, this enamel is flawless! Please contact me if you need additional information or photographs.

HILDA KRAUS BIO (courtesy The Enamel Arts Foundation website). Widely respected for her beautifully designed jewelry as well as her handsome metalwork boxes with brilliantly colored enamel decoration, the Connecticut-based artist Hilda Kraus was among the leading figures in the postwar metals and enameling fields.

From Hunter College in New York and subsequently studied sculpture with the prominent artist Chaim Gross. Her studies were followed by a three-year apprenticeship with a Danish silversmith living in New York. She later studied goldsmithing in Austria with Sepp Schmolzer and Josef Symon; mosaics in Ravenna; and enameling in France, Italy, Germany, Austria, Denmark, and the Netherlands. Hilda Kraus lived for many years in Westport, Connecticut and taught at the Silvermine Arts Center in New Canaan, the Brookfield Craft Center, and the Stamford Museum.

She was frequently awarded prizes in juried exhibitions and her work is in the collections of the Everson Museum of Art, Syracuse; the Cooper-Hewitt National Design Museum, New York; and the Delaware Art Museum, Wilmington. Her work was featured in a 1946 exhibition at the Museum of Modern Art called Modern Handmade Jewelry, one of the earliest and most influential jewelry exhibitions in the postwar period. This exhibition was curated by the prominent Cleveland-based enamelist Charles Bartley Jeffery. LASTLY, SHOULD THE WORD "EAMES" BE USED IN THE SEARCH TITLE, IT IS THERE FOR THE PURPOSE OF REFERENCING THE MID-CENTURY TIME PERIOD OF THE 1940S THROUGH THE 1970S. 14 THIS ITEM IS BEING OFFERED BY DESIGN REFERENCES -- ESTABLISHED BY A FORMER ART MUSEUM CURATOR TURNED BOOKSELLER SPECIALIZING in OUT-OF-PRINT and PERIOD MATERIALS on the PROGRESSIVE IDEAS of MODERNISM and POST-MODERNISM in DECORATIVE ARTS and ARCHITECTURE, INDUSTRIAL and STUDIO ARTS of the 19TH & 20TH CENTURIES.

15 PLEASE -- NO REQUESTS FOR PHOTOCOPIES OF THIS ITEM. I DO NOT MAKE PHOTOCOPIES UNDER ANY CIRCUMSTANCES. 16 AGAIN, COMMUNICATION IS KEY!

17 LASTLY -- WHEN OBSTACLES AND PROBLEMS LOOM LARGE AND YOU SEEM TO BE AT A STAND STILL, REMEMBER THAT EVEN A FALTERING STEP FORWARD IS BETTER THAN NO STEP AT ALL. The item "HILDA KRAUS MIDCENTURY MODERN ENAMEL COPPER ART PLATE PEACOCK PAINTING SIGNED 9" is in sale since Tuesday, November 13, 2018. This item is in the category "Collectibles\Vintage, Retro, Mid-Century\1950s".