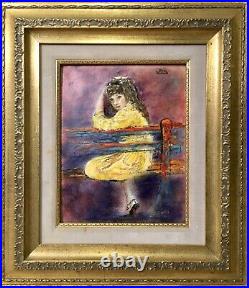 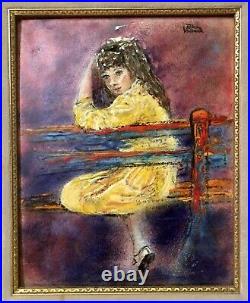 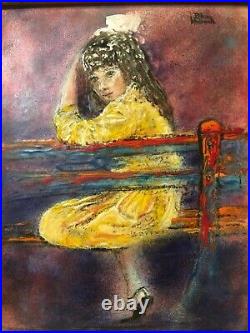 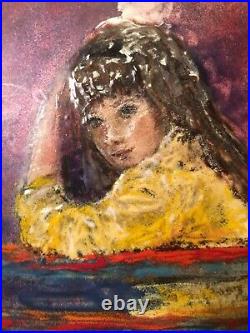 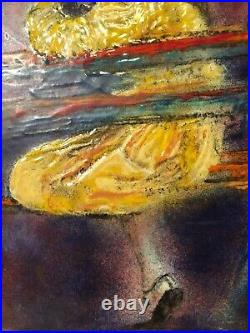 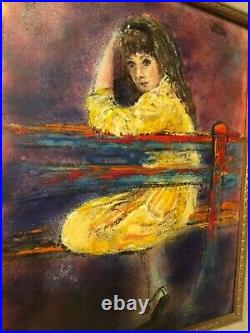 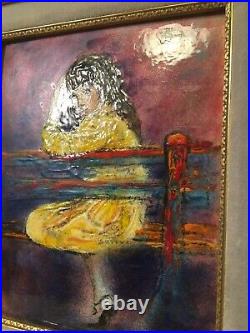 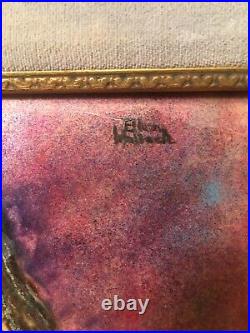 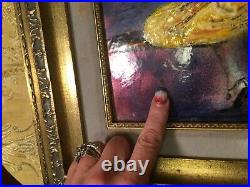 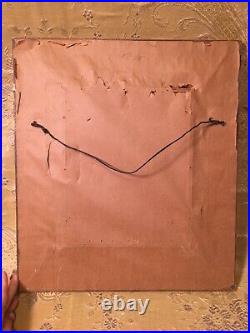 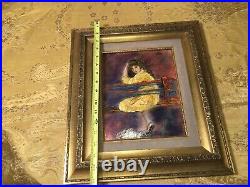 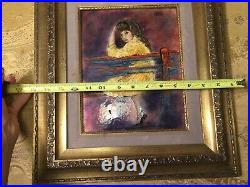 Framed size measures 15 x 17. Has one spot where enamel is worn. Check out my other items for sale.

The San Diego-based artists Ellamarie and Jackson Woolley were introduced to enameling in 1947 through a demonstration given by ceramist Richard Petterson at Scripps College in Claremont, California. Jackson Woolley was in his second year of studies at the Claremont Graduate School and this single workshop changed the course of the young couples life. Ellamarie Packard was born in San Diego in 1913.

After studying at San Diego State College (now known as California State University, San Diego) and the Art Center School in Los Angeles, she taught at the Francis W. Parker School in San Diego. While there she met and married fellow artist Jackson Woolley. Jackson Woolley was born in Pittsburgh in 1910. He studied at the Carnegie Institute of Technology where he received his bachelors degree in theater in 1930.

Trained as a Shakespearean actor, he moved to San Diego in 1935 to perform at the Old Globe Theater. After serving in the army during World War II, Jackson moved with his wife Ellamarie, whom he had married in 1940, to Claremont to pursue studies in art at the Claremont Graduate School.

During the course of his studies there in 1946 and 1947, the Woolleys became a central part of the Pomona Valley art community. The Woolleys earliest enamels, made between 1947 and 1953, were for the most part functional, intended for use or display in homes and offices.

Among their favorite forms were plates, ashtrays, and boxes. While occasionally each artist worked separately, most of this early work was produced through a close collaborative partnership between husband and wife. They signed and numbered these pieces sequentially based on the order in which they were produced. Like the work of the Cubist painters who inspired them, the Woolleys compositions included overlapping images of faces and figures, seen from varying points of view, suggesting multiple vantage points and perspectives. Starting around 1953, they each began to produce wall-mounted plaques on their own, signing them independently. Gradually their enamels both their independent and their collaborative work became more formal and abstract. Over time, each artist adopted an increasingly inventive approach to form and structure. In his later work, Jackson Woolley cut copper panels into smaller segments, often altering them before applying layers of transparent or opaque enamel.

Through this process he created enamels with richly textured and visually opulent surfaces. In the late 1950s and 1960s, Ellamarie Woolleys panels also became increasingly abstract. Influenced by Pop and Op art trends popular in the late 1960s, Ellamarie Woolley created a series of two-dimensional enamel panels which through the placement of color and shape appear to move in and out of space.

Immensely prolific and with an expansive vision for integrating their medium into daily life, the Woolleys also produced large scale architectural murals, usually made from a combination of smaller enamel panels, in theaters and other public spaces throughout California. Active during a period of dynamic growth and development in the enamels field, Ellamarie and Jackson Woolley significantly advanced enameling through their individual work as well as the work they produced in partnership with one another.