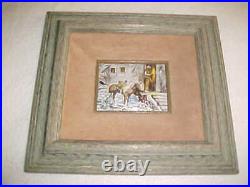 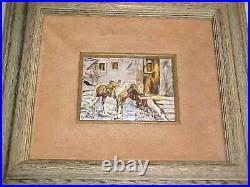 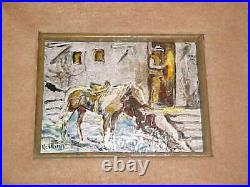 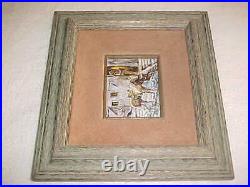 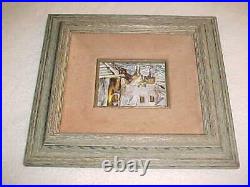 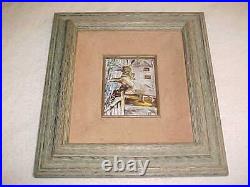 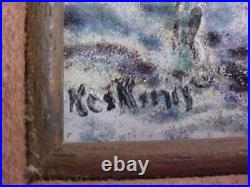 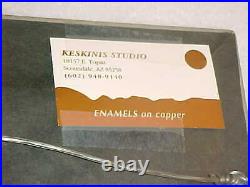 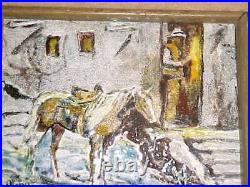 HERES AN OUTSTANDING SIGNED ENAMEL-ON-COPPER PAINTING BY ARIZONA ARTIST DAPHNÉ KESKINIS THAT DEPICTS A SCENE FROM THE OLD WEST OF A COWBOY ENTERING WHAT APPEARS TO BE A SALOON AS HIS HORSE STANDS IN FRONT! Daphné Keskinis, who was born in Paris, France, and trained at the École des Beaux Arts, is well known for her enamel-on-copper paintings depicting a wide range of subjects, including portraits, Japanese women influenced by 19th century Japanese Ukiyo-e woodblock prints, nudes, still lifes, seascapes, street scenes, among others! Here Keskinis has created a quintessential Old West scene, probably inspired by Arizonas early cowboy culture.

It shows a cowboy entering an adobe-like building, probably a saloon, as his horse stands in front. Keskinis employed various shades of brown, blue, yellow, white, and orange enameling. In addition, Keskinis selected a distressed-looking oak wood frame with a light brown leather surround in which to mount the enamel-on-copper painting, adding to the Old West visual flavor.

Signed Keskinis in the lower left corner of the enamel painting and there is an original artists card taped to the backside that reads: Keskinis Studio Enamels on Copper / 10157 E. Condition: Excellent and clean absolutely beautiful! The original black paper backing does have a few small punctures and some markings but overall is still in decent shape. The dimensions of the enamel painting itself are approximately four and one half inches (4 1/2) in width by three and one half inches (3 1/2) in height. The original oak wooden frame measures approximately eleven inches (11) in height by twelve inches (12) in width.

Please scroll down to read the artists biography about Daphné Keskinis. DAPHNÉ KESKINIS BIO (information courtesy the website for Celebrateart.

Daphné was born in Paris, France. Her whole family is involved in the history of art. Her heritage comes from afar. Her grandfather was an official portrait artist for presidents, kings and director of Ecole des Beaux Arts. Her work is represented in numerous museums. Her mother was a traditional watercolor artist. At the age of 21, Daphné moved to New York to show her artwork in an exclusive gallery.

Daphné started with oils and pastels, but for over 40 years has been enraptured by the medium of enamel. She studied with an old master, Maitre Corlin, who was a friend of Picasso and Braque.

She currently works with oils and enamels from her Studio Gallery in Carefree, Arizona and in South France. In the inspiration of the new and old world, her subjects are versatile, bringing a force and excitement in panorama of both continents. Enameling is the colorful result of fusing powdered glass to metal or glass by firing. The powder melts, flows and hardens to a smooth, durable vitreous coating.

Applied enamel pottery and stone objects date back to the ancient Egyptians. The French invented the technique of painting with a special enamel called blanc de Limoges over a dark enameled surface to form a detailed picture, often human figure. Limoges enamel, made in Limoges, France is the most famous European center of vitreous enamel production. When Daphné paints the fused powdered glass to copper, she creates ancient gardens, views of restaurants and cafes, chefs, religious images, and gorgeous bouquets. In the past few years, she has been creating contemporary paneled wall hangings where the flowing colors create emotional movement.

Her enameled fabulous faces seem to speak to you as if they are someone you know. Daphné has been oil and enamel painting at the Celebration of Fine Art since 1993. LASTLY, SHOULD THE WORD "EAMES" BE USED IN THE SEARCH TITLE, IT IS THERE FOR THE PURPOSE OF REFERENCING THE MID-CENTURY TIME PERIOD OF THE 1940S THROUGH THE 1970S.

14 THIS ITEM IS BEING OFFERED BY DESIGN REFERENCES -- ESTABLISHED BY A FORMER ART MUSEUM CURATOR TURNED BOOKSELLER SPECIALIZING in OUT-OF-PRINT and PERIOD MATERIALS on the PROGRESSIVE IDEAS of MODERNISM and POST-MODERNISM in DECORATIVE ARTS and ARCHITECTURE, INDUSTRIAL and STUDIO ARTS of the 19TH & 20TH CENTURIES. 15 PLEASE -- NO REQUESTS FOR PHOTOCOPIES OF THIS ITEM. I DO NOT MAKE PHOTOCOPIES UNDER ANY CIRCUMSTANCES. 16 AGAIN, COMMUNICATION IS KEY! 17 LASTLY -- WHEN OBSTACLES AND PROBLEMS LOOM LARGE AND YOU SEEM TO BE AT A STAND STILL, REMEMBER THAT EVEN A FALTERING STEP FORWARD IS BETTER THAN NO STEP AT ALL. The item "DAPHNE KESKINIS MODERN ENAMEL COPPER ART PAINTING PLAQUE WESTERN ARIZONA COWBOY" is in sale since Monday, March 4, 2019. This item is in the category "Collectibles\Vintage, Retro, Mid-Century\1950s". The seller is "singeldad" and is located in Scottsdale, Arizona. This item can be shipped to United States.