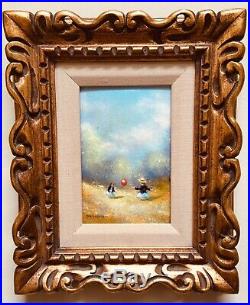 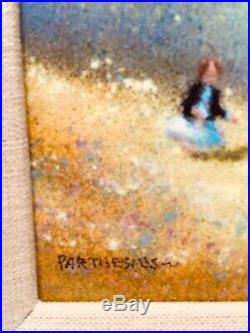 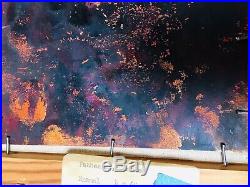 Beautiful ORIGINAL ANTIQUE Enamel on Copper PAINTING by CHARLES EDWARD PARTHESIUS. Framed, it measures 11" x 9", in it's custom MID-CENTURY Carved Wood FRAME, with an ANTIQUE. The thick beveled matte is covered in a NEUTRAL CLOTH. The thin COPPER PANEL itself, on which the ENAMEL ART is rendered, measures 6" tall X 4" wide. In the unmistakable impressionist style of Monet or Renoir, this Artist depicts two ADOLESCENT GIRLS at play with a red balloon in a dream-like SPRINGTIME MEADOW.

Dressed in Victorian era clothing they frolic in the sunlight on a grassy meadow. To fully appreciate the talent of this Artist one must consider that this is not an oil painting on canvas, but an artistic vision infused into an ENAMEL COATING on COPPER METAL. The artist's signature on the lower left reads: Parthesius.

CHARLES PARTHESIUS began his successful career as a watercolorist, delving into the medium of enameling in the 1960's. His work became popular and eventually examples could be found in galleries worldwide. In 1970 he teamed with his son to make enameling a family business. "Charles Parthesius", the signatory of this work, is now deceased.

This "Beautiful and Endearing" INVESTMENT QUALITY FRAMED ENAMEL ART is in overall, EXCELLENT "Previously Owned" CONDITION! Charles Edward Parthesius was born on April 25, 1921, in Maspeth, Queens, New York City. His father was from Dutch-German extraction and my mother was born in Switzerland. He dabbled in art was at an early age.

With his two older brothers, sat at the kitchen table copying characters from the comics, while his mother was the critic, who encouraged them by praising our work. He pursued an art education by attending as an art major, in high school, where he graduated in 1939 with honors. Watercolor was his favorite medium. He was entering local art exhibits, picking up ribbons along the way. While participating in an outdoor art show on Long Island, he was approached by a man running a private art school.

He thought so much of his work, he asked him to teach art at the school. Later he became interested in enamels. Parthesius worked in the style of French impressionists such as Manet, Pizzarro, Boudin, Monet, Renoir and others that have a lot of color in their work.

He tried to bring out the nostalgic times of the turn of the century. The ladies in his paintings are dressed in lovely tresses and the men have derbies or high hates. Sometimes he used a standard background which includes children playing ball, flying kites, or carrying balloons.