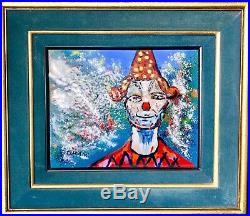 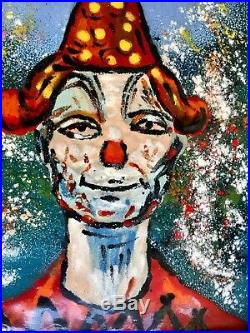 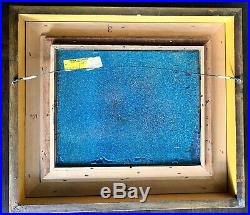 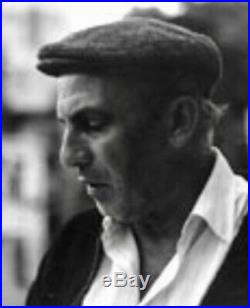 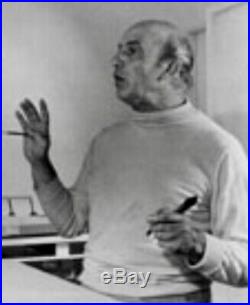 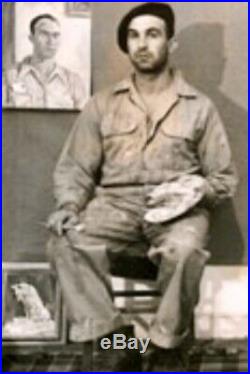 Please refer to photographs for details and all questions are welcome.. Born in Youngstown, Ohio, in 1915, Pat, also known as Pascal, grew up in this working class neighborhood of steel mills and rubber factories. He was the eldest of seven in a close-knit Italian-American Catholic family. Even when young, in grade school, he was already known for his sketches of friends and local characters. He worked odd jobs including being a milkman, working for a cobbler, spending time backstage at circuses in the summer and working in a rubber factory.

But his interest was always in art, even though his exposure to art was limited in Youngstown. It was upon his return that he started painting on his own and was determined to make a career of his art. Stimulated by his strong interest in art, Pat moved out west.

He traveled through Phoenix, Arizona and then to Los Angeles and then finally settled in San Francisco. Those were the Bohemian days of San Francisco, associated with the Beat era. Writers, philosophers, poets and artists frequented North Beach, and the many cafes and nightclubs became their gathering spots.

He became acquainted with Enrico Banducci, owner of a nightclub called the hungry i and Pat exhibited paintings there as well as at the Fox and the Hound, the Iron Pot and the Black Cat Cafes. He settled in Sausalito, a picturesque artist community across the bay, just a short drive across the Golden Gate Bridge from San Francisco where he continued to work and exhibit.

It was in 1960 he met the love of his life, Kitty and after a short courtship, they were married. Later known as Maria, she would inspire many portraits and was his life long companion. In 1963, he enjoyed the birth of his daughter, Angelique with whom he would share his love of art. He was honored with a nomination for the Presidential Medal of Freedom in 1965 and received an honorable mention by the San Franciscos Chamber of Commerce for enhancing the prestige of San Francisco and the Bay Area as a major world culture center through his creative energy and work. As he continued to paint, his artwork appeared in art museums throughout the world, and there are many stories of people visiting San Francisco and returning home with a Cucaro painting.

He traveled extensively, both on his own and later with his wife and daughter. Each country would inspire him, and he would do sketches and watercolors while traveling and then do larger pieces back at his studio at home. Crowds of people, especially gatherings at market places, festivals and bazaars, always captivated him. Inspired by these active and colorful scenes of life, he would paint these people-people paintings, one of his favorite subjects. He would also paint circus scenes, portraits, landscapes, horses, café interiors, street scenes and still life.

He was always exploring new techniques of painting with watercolors, acrylics and oils and various combinations of the three (mixed medium) and even experimented with lithographs and enamels on copper. I could never get bored painting!

Although primarily inspired by Impressionists and Expressionists and such artists as Van Gough and Toulouse-Lautrec, he created his own style. His art evolved over time and was the result of the fusion of many influences and much experimentation. Favoring bright colors and a dynamic brush stroke, he would also incorporate linear definition and open perspectives in his paintings. He often would paint with heavy layers of medium- opaque and dense. Some times, he would paint with thin layers of transparency.

For the finish, occasionally, he would leave the surface rough and often, he would finish the work with a thickly varnished surface. He was intrigued by different shapes and surfaces and liked to paint on those that differed from the usual rectangles and canvas.

On narrow upright canvas, hed paint street scenes of Naples, complete with laundry strung between the houses that lined the narrow alleyways. On thin strips of wood of yardsticks and rulers, he did expressive faces. On guitars and violins, he painted clown portraits. On round, oval or triangular shaped canvas or masonite, he did florals with exploding bright colors or galloping horsemen.

He even painted on plexiglass, formica and sheets of steel and was even known to draw on paper plates or napkins when the moment arose. Throughout the years, this prolific artist had one man art shows, benefits, and exhibits.

He was even at one time an art dealer and had his own gallery in San Francisco. Amongst his one man art shows were ones held at: the Butler Institute of American Art in Youngstown, Ohio, at Stanford University, Palo Alto, Calif. International Gallery in Chicago and Pittsburg Plan for Art and many more. Amongst the many charities to which he donated the proceeds of the sales of his art were: National Association for the Visually Handicapped, Brevard Alzheimers Foundation, SF Aid of Retarded Children, Committee to Rescue Italian Art and Villa Maria Convent and many more.

He exhibited at many galleries from the Frame House Art Gallery of Boardman, Ohio to the Cory Galleries, De Medici Gallery, City Gallery, Lyon Art Gallery of San Francisco and in Sausalito at the Village Faire, Shelby Art Gallery and the Connextions Gallery and at many more. Pat passed away in January, 2004, and his dynamic and expressive nature lives on through his numerous works and continues to give joy to those who have his art in their homes. As Pat once said, Some may label me as impressionistic but categorizing a painter limits him and can some times prevent him from finding himself. A painter is always changing, revising his techniques and subjects so that its not really fair to put him under a title. He has to change and experiment, to grow and to better his art.