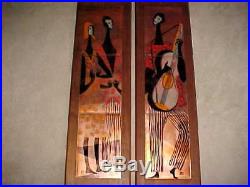 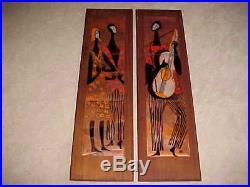 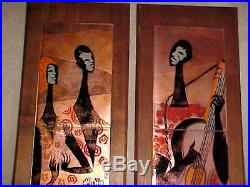 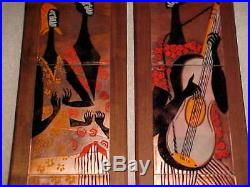 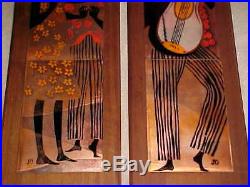 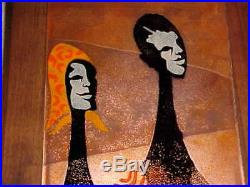 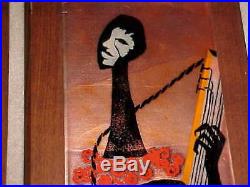 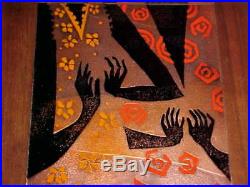 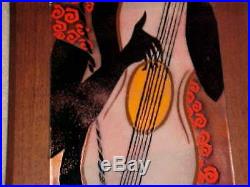 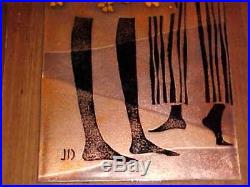 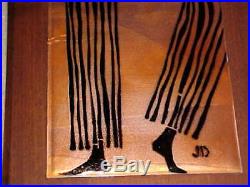 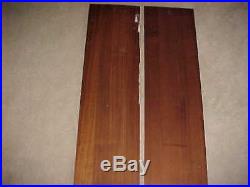 HERES A PAIR OF RARE SIGNED ORIGINAL VINTAGE MODERN MIDCENTURY 1960S OR 1970S ENAMEL-ON-COPPER THREE-TILE PLAQUES / PAINTINGS DESIGNED BY MASSACHUSETTS ARTIST JUDITH DANER WITH THEIR ORIGINAL WALNUT BOARD-FRAMING! Please Note: According to available information about Judith Daners early activities as an enamel artist, she worked as a designer for both Bovano of Cheshire, Connecticut, and Robert Wuersch Associates of Fall River, Massachusetts. These Judith Daner three-tile plaques / paintings portray a young couple clapping their hands while enjoying the music of a guitar player. The men are wearing striped black pants and abstracted flowery orange shirts while the young woman wears a flowery orange dress and a flowery orange bandana wrapped over her head. All three figures are standing and look to possibly be Jamaican.

Daner used the technique of stenciling so that the design has a layered / 3-dimensional effect rendered in variations of orange, white, and black enameling. This took multiple firings to accomplish. The enamels are mounted to simple walnut board frames. Measurements: Each three-tile plaque measures approximately thirty three inches (33) in height by seven and one half inches (7 1/2) in width. And the overall dimensions of each of the walnut board frames is approximately forty inches (40) in height by eleven inches (11) in width.

Each plaque is signed with Daners initials JD in the bottom right and left corners, respectively. Condition: Both enamel plaques and their walnut board frames are in good and generally clean condition.

Both walnut board frames have some small scratches as well as some white paint around the outer edges. Overall and regardless of the faults mentioned, this pair of rare original vintage midcentury modern enamel-on-copper paintings / plaques is very presentable and a visually-stunning knockout example of Judith Daners enamel art! Judith Ellen Daner is currently 82 years young and resides in Ashland, Massachusetts, with her husband Stanley. Daner currently teaches enameling at the Worcester Center for Crafts and conducts workshops as a visiting professor at various colleges. During 2013, a major exhibition titled Honor Thy Teacher: Works By Judith Daner & Her Enameling Students was held at the Krikorian Gallery of the Worcester Center for Crafts.

This exhibition honored the influence and enamel work of Daner and included examples by Daner and by many enamel artists who she has influenced as a teacher and mentor. Daner studied at Parson's School of Design, the Art Students League in New York, and she received her BFA with top honors from Pratt Institute. Her work has been exhibited in galleries and museums nationally and the Biennale Internationale in France.

Early in her career, Daner was a designer for Bovano of Cheshire, Connecticut, and Robert Wuersch Associates of Fall River, Massachusetts. In addition to teaching at the Worcester Center for Crafts, Daner has taught at the Brookfield Craft Center, De Cordova Museum School, Snowfarm (Williamstown, MA), Metalwerx (Waltham, MA), and the West Palm Beach Enameling Guild. She has also been the recipient of several special commissions from the following institutions: Union Market Bank of Watertown, Massachusetts; Leominster Savings Bank of Leominster, Massachusetts; and First National Bank of Boston, Massachusetts.

Daner has exhibited in the Newbury Street Gallery in Boston, Massachusetts, the Metarco Gallery on Madison Avenue in New York City, the Maniposa Gallery in Albuquerque, New Mexico, and the Danforth Museum of Art in Framingham, Massachusetts. LASTLY, SHOULD THE WORD "EAMES" BE USED IN THE SEARCH TITLE, IT IS THERE FOR THE PURPOSE OF REFERENCING THE MID-CENTURY TIME PERIOD OF THE 1940S THROUGH THE 1970S.

The item "33 RARE PAIR JUDITH DANER ENAMEL COPPER ART PAINTINGS MODERN MIDCENTURY PLAQUES" is in sale since Friday, December 7, 2018. This item is in the category "Collectibles\Vintage, Retro, Mid-Century\1950s". The seller is "singeldad" and is located in Scottsdale, Arizona. This item can be shipped to United States.