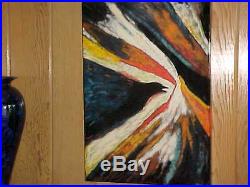 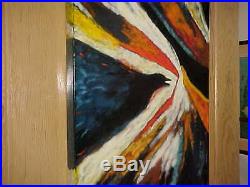 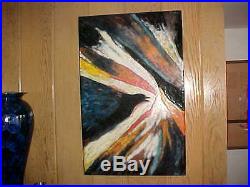 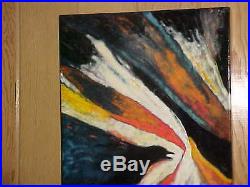 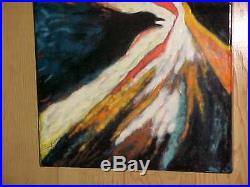 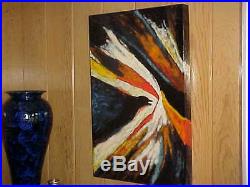 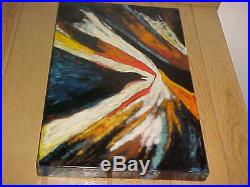 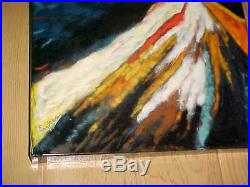 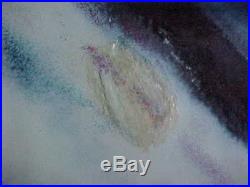 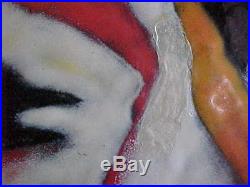 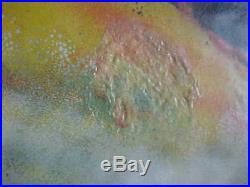 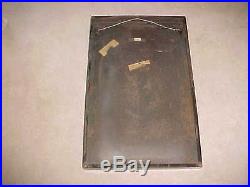 HERES A SPECTACULAR SIGNED 28 1/2" X 18" X 2 1/8 ORIGINAL VINTAGE 1960S-1980S MODERN ENAMEL-ON-STEEL (NOT COPPER) PAINTING BY BILLINGS, MONTANA ARTISTS RICHARD KOHL (DICK) EYRES AND MARIE KROM EYRES! Please Note: Only the enamel-on-steel painting is part of this action listing, not the blue crystalline vase or other artworks shown on the periphery. Measuring approximately twenty eight and one half inches (28 1/2) in height, eighteen inches (18) in width, by two and one eighth inches (2 1/8") in depth, husband-and-wife enamel artists Dick and Marie Eyres created a visually powerful enamel-on-steel (not copper) painting that they appear to have titled "Flight" (paper label on the backside looks as though it has the word "Flight but it is very faded). As you can see from the photographs shown above, the artists essentially created a large enamel abstraction that when brought into focus is actually a blue and black crow or raven in flight and coming into the painting from the left side. The Eyres employed large streams or waves of enameling to represent the wind resistance into which the crow/raven is flying headfirst.

The overall image is quite a remarkable visual construct and very well executed. The enameling itself was rendered in various shades of creamy white, black, orange and reddish-orange, yellow, dark blue, and brown. Signed "Eyres" within the enameling itself in the lower left corner, and there are remnants of two labels on the backside. In addition, there is a third paper label on the backside that looks as though it has the word "Flight" but it is very faded.

Condition: From outward appearances, this Eyres enamel-on-steel painting looks amazing! And for the most part, it is amazing! HOWEVER, there are a few very small corner chips (not bad and not visible from the front) and a few small surface markings (again, barely perceptible). Also, a former owner had three slightly larger than quarter-sized areas filled with a blended epoxy where there was obviously some surface damage. These three "filled" areas, which are located of the front of the painting at different places, are shown in the photographs above and ambient lighting was used for the photography so that they would have a better chance of being seen.

These "filled" areas actually blend very well with the original enameling. Regardless of the faults mentioned, this is top-level example of modern American enamel arts by two incredible artists.

Please scroll down to read the artist's biography about Dick and Marie Eyres. (the following information is reprinted in its entirety from an artist's brochure attached to one their enamel paintings). Enamels by Dick and Marie Eyres. Marie and Dick Eyres, a husband-and-wife team, specialized in the process which combines vitreous enamel and steel in multiple art forms. Vitreous enamel, as the name implies, is a glass which when pulverized can be applied in a dry or liquid state to metal backgrounds.

In order to fuse enamel glasses to metal at temperatures as low as 1500 F, the borosilicate and lead varieties are used. They may be transparent, opaque, opalescent, black, white, or colored.

Copper is most often used as the metal component of smaller enamel art pieces. The Eyres perfected their process using cobalted steel instead; this allows for the beauty and expansion of larger pieces which are less subject to bending or fracturing the glass. In the process of enameling, the steel surface is cleaned and cobalted, the enamel compound of silicates and additives is applied, and then fusion is done with several minutes of high heat.

Withdrawn from the kiln, the molten enamel cools to a thin film of glass on metal. Successive firings, options in the manner of application, and diverse ways of combining enamel with graphics, painting and sculpture offer the artist limitless possibilities.

Vitreous enamel fused to steel creates a bond that defies time and weather. It has a permanence, a depth of color and a complexity of light refraction found in no other medium. Marie and Dick worked at their studio in Billings, Montana until Dick's death.

Recently Marie moved to Seattle. In the fall of 1992 their work was first exhibited at University Christian Church.

The Eyres' work in the product of close collaboration in concept and execution. They created many works of both secular and religious subjects. Their art is displayed publicly and privately throughout the United States. (for additional information about the Eyres and to see their personal photographs, please conduct an Internet search using the words: bios dick marie). LASTLY, SHOULD THE WORD "EAMES" BE USED IN THE SEARCH TITLE, IT IS THERE FOR THE PURPOSE OF REFERENCING THE MID-CENTURY TIME PERIOD OF THE 1940S THROUGH THE 1970S. 14 THIS ITEM IS BEING OFFERED BY DESIGN REFERENCES -- ESTABLISHED BY A FORMER ART MUSEUM CURATOR TURNED BOOKSELLER SPECIALIZING in OUT-OF-PRINT and PERIOD MATERIALS on the PROGRESSIVE IDEAS of MODERNISM and POST-MODERNISM in DECORATIVE ARTS and ARCHITECTURE, INDUSTRIAL and STUDIO ARTS of the 19TH & 20TH CENTURIES. 15 PLEASE -- NO REQUESTS FOR PHOTOCOPIES OF THIS ITEM. I DO NOT MAKE PHOTOCOPIES UNDER ANY CIRCUMSTANCES. 16 AGAIN, COMMUNICATION IS KEY! 17 LASTLY -- WHEN OBSTACLES AND PROBLEMS LOOM LARGE AND YOU SEEM TO BE AT A STAND STILL, REMEMBER THAT EVEN A FALTERING STEP FORWARD IS BETTER THAN NO STEP AT ALL. The item "28 X 18 SIGNED DICK&MARIE EYRES MODERN ENAMEL STEEL (NOT COPPER) ART PAINTING" is in sale since Tuesday, December 4, 2018. This item is in the category "Collectibles\Vintage, Retro, Mid-Century\1950s". The seller is "singeldad" and is located in Scottsdale, Arizona.