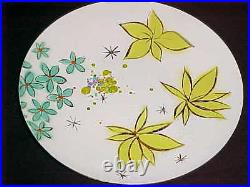 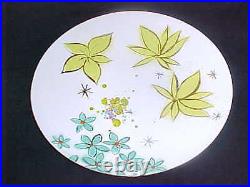 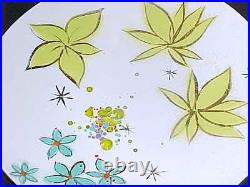 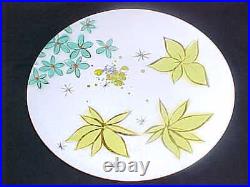 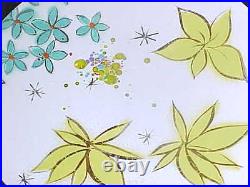 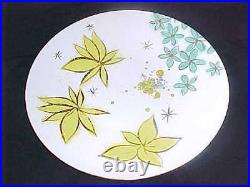 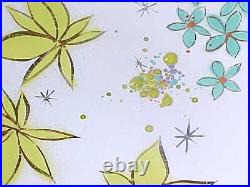 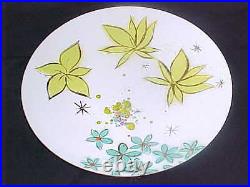 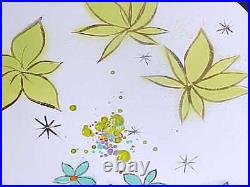 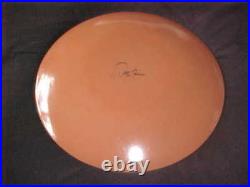 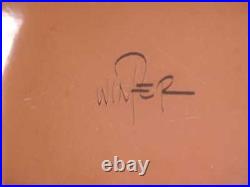 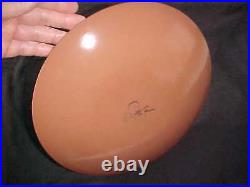 HERES AN 11 ORIGINAL VINTAGE 1950S MODERN MIDCENTURY ENAMEL-ON-STEEL PLATE (NOT COPPER) BY CLEVELAND, OHIO ARTIST THELMA FRAZIER WINTER! Measuring approximately eleven inches (11) in diameter by one inch (1) in height, Thelma Winter created an enamel-on-steel painting depicting three large yellow and gold flowers one side, a group of smaller aqua-blue, orange-red, and gold flowers on the opposing side, and a small cluster of yellow, aqua-blue, red, and purple enamel dots or bubbles in the center.

In addition, there are several gold stars floating around and everything is set against a white enameled background. The plates underside is counter enameled in light brown enamel. Signed Winter within the enamel itself on the underside bottom. And although this particular example does not carry the first name Thelma this plate is unquestionably the work of Thelma Winter. Stylistically as well as in the way in which the painting is executed both point to Thelma Winter (and not Edward). Condition: Generally excellent and clean condition with only very minor wear on the underside bottom where the plate meets the counter. Overall, this is a wonderful example of Thelma Frazier Winters midcentury enamel art! Please scroll down to read the artist bio about the artist. The Cleveland-based artist Thelma Frazier Winter is best known for her monumental clay sculpture, hand-built forms of all sizes, designed in a richly expressive modernist style. In these works, which frequently depict idealized human figures and animals, vivid polychrome glazes enliven the artists highly imaginative compositions. Thelma Winters work, like that of her fellow Cleveland School colleagues Viktor Schreckengost, Waylande Gregory, and her husband Edward Winter, was strongly influenced by early 20th-century Viennese design innovations. The sense of humor or whimsy apparent in her work, along with her interest in figurative subjects and animals, stylized compositions, and her use of colorful glazes to enrich her powerful clay sculpture, all underscore her indebtedness to the Wiener Werkstätte tradition she was exposed to through her European-trained teachers at the Cleveland Institute of Art. A well-respected educator and leader in the mid 20th-century ceramics field, Thelma Winter published The Art and Craft of Ceramic Sculpture in 1973, introducing a generation of American artists to figurative clay sculpture.

The artists husband, Edward Winter, whom she married in 1939, was among the leading figures in the contemporary enamels field. In the mid 1950s, Thelma Winter decided to add enameling to her wide repertoire of materials and techniques.

Over the next two decades she produced a large body of work in enamel including plates, bowls, and wall-mounted plaques. However, unlike her husbands work, which was usually abstract, Thelma Winters enamels were loosely rendered in a broad painterly manner and often depicted figures or images of animals, birds, or fish. Throughout the late 1950s, 1960s and early 1970s, the Winters worked together on a number of large enamel murals, commissions for local churches and public buildings. Edward Winter described their collaborative process in his 1958 book Enamel Art on Metals: My first experience with church enamels was in 1955 when, at the request of architect Ray J.

Kloski, my wife, Thelma, and I were invited to design and execute enameled steel mural decorations for the Bethany Lutheran Church of Ashtabula, Ohio. Through Thelmas knowledge of and interest in Biblical figures, she assumed the creative designing of these sectional decorations.

In her design she used a system of dynamic symmetry that directed the eye of the observer to follow the lines of the horizontal and diagonals throughout all sections of the decoration. The executing of the work was, of course, in my domaine. Without a doubt, Edward Winters passion for his medium had a profound influence on Thelma Winters work in enamel. Thelma Winter was born in 1903 in Gnadenhutten, Ohio. Encouraged by her mother from an early age, she studied at the Cleveland Institute of Art with Julius Mihalik, a design instructor and former head of the Royal Hungarian School of Industrial Art in Budapest. She also studied ceramics with the eminent ceramist Guy Cowan. She worked for Cowan Pottery from 1929 to 1931, designing a wide variety of functional and ornamental ware in a spare, modernist style. In art education from Case Western Reserve University in 1935, she taught at the Laurel School in Cleveland (1939 1945) and at the Cleveland Institute of Art (1945 1950).

A regular exhibitor in the Cleveland Museum of Arts May Shows, she was awarded in 1939 the prestigious first prize for sculpture in the Syracuse Museum of Fine Arts National Ceramics Exhibition. Her work, both her ceramics and her enamels, was widely exhibited throughout her life. LASTLY, SHOULD THE WORD "EAMES" BE USED IN THE SEARCH TITLE, IT IS THERE FOR THE PURPOSE OF REFERENCING THE MID-CENTURY TIME PERIOD OF THE 1940S THROUGH THE 1970S.

The item "11 THELMA WINTER ENAMEL STEEL ART PLATE MODERN MIDCENTURY PAINTING (NOT COPPER)" is in sale since Monday, February 4, 2019. This item is in the category "Collectibles\Vintage, Retro, Mid-Century\1950s". The seller is "singeldad" and is located in Scottsdale, Arizona.