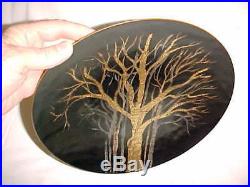 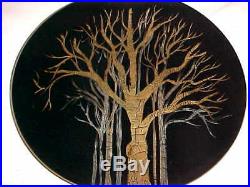 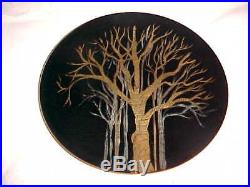 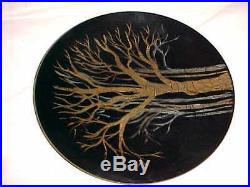 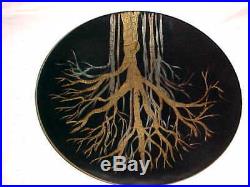 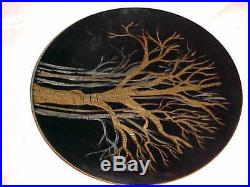 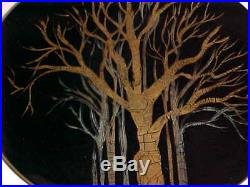 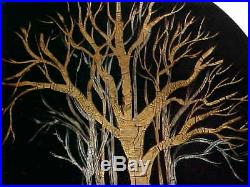 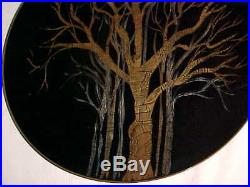 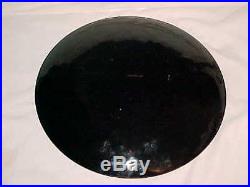 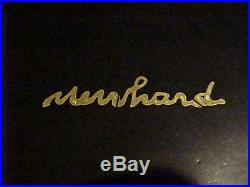 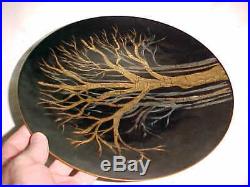 Measuring approximately eleven inches (11) in diameter by one inch (1) in height, Helen Newhard appears to have hand-formed the plates substantial copper form (very thick and heavy) on which she then created a dramatic group of gold and silver enameled trees set against a glossy dark enameled background. Newhard chose to render the trees without leaves and emphasized the barren aspects of their trunks and branches.

The primary gold tree has a somewhat knotted-up trunck. The overall scene is quite striking! Also, the plates underside is counter enameled in the same glossy black enamel.

HELEN NEWHARD BIO information courtesy of the website for the Plaza Of Heroines at Iowa State College, Ames, Iowa, and the biography written by Helen Newhards niece Nancy Newhard Melton Ray, Ph. Newhard July 25, 1908-July 25, 1992 was a 1929 honor graduate in art and home economics from Iowa State College in her native Ames, Iowa. Her collegian years were filled with activities including Women's Guild; Women's "A" Fraternity (basketball and field hockey); Women's Athletic Association (president); Delta Phi Delta (art fraternity); Phi Upsilon Omicron (home economics fraternity); Chi Omega (social sorority); Bomb Key (1929 Associate Editor of The Bomb of 1929); Jack O' Lantern; Hec Vodvil; Veishea Night Show; May Fete (business manager); and Mortar Board (an honorary society for senior women in recognition of leadership campus service and scholarship). She taught Smith Hughes Home Economics for one year in Bonesteel, South Dakota before moving to Milwaukee, Wisconsin in 1930 where she taught weaving to enthusiastic adult classes at the Vocational and Adult Education School until her retirement in 1963. She earned a master's degree in education at Marquette University in 1945 and studied painting with Charles Thwaites, Robert von Neumann, Forrest Flower, and others. In 1952, her mother, Mrs. Lena Pitts Newhard, retired from the City Clerk's Office in Ames, Iowa and joined her daughter in Milwaukee where the two lived at, 2213 East Stratford Court in a Frank Lloyd Wright-designed house, that was built in 1924.

She became a devotee of enameling when she and Miss Evelyn McKinley (who taught microbiology to student nurses) attended a demonstration at Wisconsin State College. Consequently the McKinley-Newhard Crafts business was born in the basement studio of the Newhard home.

In 1953 the partners spent their summer vacation from teaching in Rockport Mass a resort and artists' colony where their perfectionist beautifully-hued jewelry bowls and dishes and silver jewelry were enthusiastically received by customers at the J. While both women considered teaching at the Vocational School their primary interest they moved their summer Enamel and Silver shop to Central City, Colorado, in 1955. Evelyn retired from teaching in 1960 to start their winter shop in St. In 1963, Ness Newhard retired from teaching and she and her mother moved to Florida.

The McKinley-Newhard Crafts partnership continued in Colorado during the summers and their studio at 59 Hypolita in historic St. Augustine was operational from 1960 until Miss. Lena Newhard died the same year.

Although she took time out to travel around the world in 1970 and to the South Pacific in 1973 Miss Newhard continued the business at the Florida location alone through 1977. Augustine Restoration area for many years.

In Florida she served as the corresponding secretary of the first St. Augustine Arts and Crafts Council which started the Palm Sunday Arts and Crafts Festival in the Plaza. She was a member of Florida Craftsmen beginning in 1963 and served for several years as editor of the newsletter. Honored by her niece, Nancy Newhard Melton Ray, Ph. LASTLY, SHOULD THE WORD "EAMES" BE USED IN THE SEARCH TITLE, IT IS THERE FOR THE PURPOSE OF REFERENCING THE MID-CENTURY TIME PERIOD OF THE 1940S THROUGH THE 1970S.

16 AGAIN, COMMUNICATION IS KEY! 17 LASTLY -- WHEN OBSTACLES AND PROBLEMS LOOM LARGE AND YOU SEEM TO BE AT A STAND STILL, REMEMBER THAT EVEN A FALTERING STEP FORWARD IS BETTER THAN NO STEP AT ALL. The item "11 SIGNED HELEN NEWHARD MODERN ENAMEL COPPER ART PLATE MIDCENTURY TREE PAINTING" is in sale since Tuesday, November 20, 2018. This item is in the category "Collectibles\Vintage, Retro, Mid-Century\1950s". The seller is "singeldad" and is located in Scottsdale, Arizona. This item can be shipped to United States.