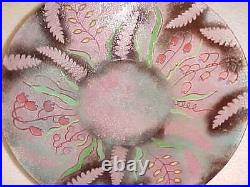 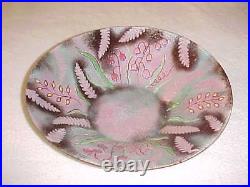 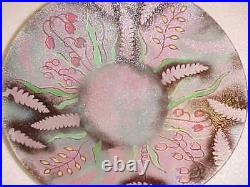 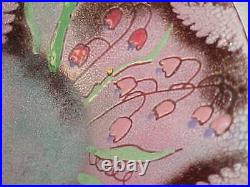 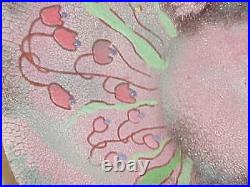 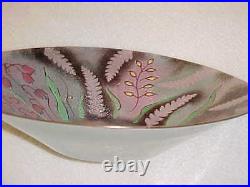 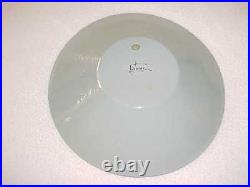 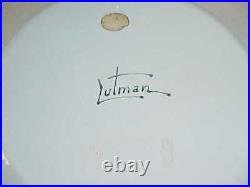 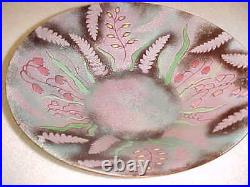 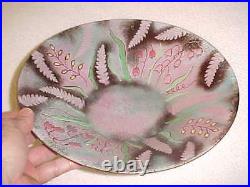 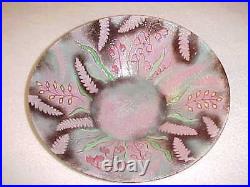 HERES A RARE ORIGINAL VINTAGE 1950S SIGNED MIDCENTURY MODERN ENAMEL-ON-COPPER BOWL CREATED BY PENNSYLVANIA ENAMELIST RUTH HESS LUTMAN! Signed on the underside bottom with a black in-the-enamel signature Lutman along with the remnants of what was probably an old price label (no longer discernable), this visually stunning example of Lutmans enamel art measures approximately eleven inches (11) in diameter and two and a half inches (2 1/2) in height. To this end, Lutman used a combination of painterly techniques, sgrafitto, and silhouetting to create a richly textured design of vines, leaves, and various flowers rendered in shades of purple, pink, green, yellow, brown, and blue. Lutman applied the enamels in such a way as to create a granular feel and look to the surface quite fascinating! The underside of this rare original vintage midcentury modernist enamel-on-copper bowl was counter-enameled by Lutman in a thickly applied bluish-grey enamel. Condition: This bowl is in beautiful condition nearly flawless! There are only a few extremely small fleabite nicks on the rim barely visible. And for clarification purposes, the form of the bowl itself is somewhat uneven which is completely original to the making of the piece.

Because Lutman was a well-rounded metal artist who not only made enamels but also modernist silver jewelry, she most likely made the copper form of this bowl herself. Please contact me if you need additional information or photographs. Lutman was also an art teacher for at least two decades during the 1950s and 1960s at Ambridge High School in Leetsdale, Pennsylvania, where she was head of the art department.

According to a rather lengthy article about Lutman published in the Beaver County Times newspaper on August 13, 1962, she received her training as an enamelist by studying with Kenneth Bates and Charles Bartley Jeffery, both of Cleveland, Ohio, as well as with Helen Worrall at the University of Tennessee and with Peter Ostuni in New York City. In addition, Lutman received both an undergraduate and graduate degree from the University of Pittsburgh and then continued post-graduate studies at the University of Tennessee and at Carnegie Tech. Born and raised in Johnstown, Pennsylvania, various published articles indicate that Lutman lived and worked as an artist first in Leetsdale, Pennsylvania, then in Sewickley, Pennsylvania, and finally after her husband George Louis Lutman died in 1966, she eventually moved to Fort Meyers, Florida. Simultaneously to the time she was located in Leetsdale and Sewickley, Pennsylvania, and possibly even afterwards when she to Florida, Lutman also had a home and studio called Hilltop located near Peterborough, Ontario, in Canada.

To this end, Lutman was a member of the Canadian Handicraft Guild (Ontario Chapter) and she won numerous awards for her enamels in both the Canadian National Exhibitions and Canadian International Exhibitions held in Toronto during the 1950s and early 1960s. Back in the United States, Lutman was a member of the Pennsylvania Craftsmens Guild and the Winston-Salem Art Guild in North Carolina. She regularly exhibited her work with the Associated Artists of Pittsburgh, the Three Rivers Arts Festival, and the Glenshaw Artists & Craftsmens Guild. LASTLY, SHOULD THE WORD "EAMES" BE USED IN THE SEARCH TITLE, IT IS THERE FOR THE PURPOSE OF REFERENCING THE MID-CENTURY TIME PERIOD OF THE 1940S THROUGH THE 1970S. 14 THIS ITEM IS BEING OFFERED BY DESIGN REFERENCES -- ESTABLISHED BY A FORMER ART MUSEUM CURATOR TURNED BOOKSELLER SPECIALIZING in OUT-OF-PRINT and PERIOD MATERIALS on the PROGRESSIVE IDEAS of MODERNISM and POST-MODERNISM in DECORATIVE ARTS and ARCHITECTURE, INDUSTRIAL and STUDIO ARTS of the 19TH & 20TH CENTURIES.

15 PLEASE -- NO REQUESTS FOR PHOTOCOPIES OF THIS ITEM. I DO NOT MAKE PHOTOCOPIES UNDER ANY CIRCUMSTANCES. 16 AGAIN, COMMUNICATION IS KEY! 17 LASTLY -- WHEN OBSTACLES AND PROBLEMS LOOM LARGE AND YOU SEEM TO BE AT A STAND STILL, REMEMBER THAT EVEN A FALTERING STEP FORWARD IS BETTER THAN NO STEP AT ALL. The item "11 RUTH LUTMAN MODERN MIDCENTURY ENAMEL COPPER ART BOWL 1950S ABSTRACT PAINTING" is in sale since Sunday, November 18, 2018.